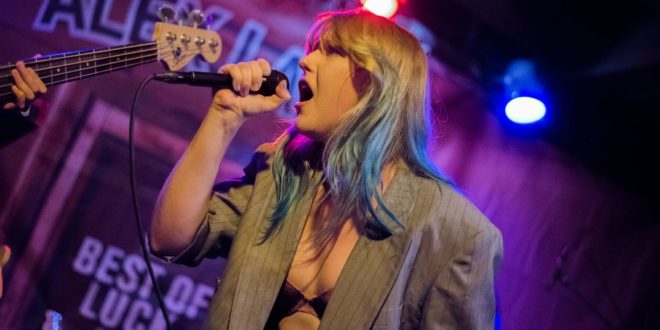 Today, Caroline Kingsbury announces a fall tour alongside Caveman. The tour kicks off in Buffalo, NY on September 9th. Buy tickets NOW. Kingsbury will be touring in support of her new album Heaven’s Just a Flight, which was released on April 16th.

Heaven’s Just a Flight is the first release from Fortune Tellers, a label founded by Peter Matthew Bauer of the Walkmen with several more to come in the following months. Last year, Caroline self released a few of these songs, opened for Chai, Aurora, Miya Folick and went on a US tour with Alex Lahey. Her music was also featured on the Netflix show“The Chilling Adventures of Sabrina.” Up until now, she’d always gone under the name “Kingsbury.” She has elected to shift her artist name to the full “Caroline Kingsbury” for the new record, deciding that, in these times, it was important to show exactly who you are-every side of you – “not just a fantasy of who you might become.”

Entitled Heaven’s Just a Flight, it’s the story of a queer artist from a religious family coming out to the world, meeting her girlfriend, finding her people and her place. It’s the story of her older brother’s battle with cancer, his sudden passing just as she arrives home from her first national tour, just as she’s set to release her first single.

Tour dates and tickets can be found HERE.

Previous Single Review:  “As Good As It Gets” Wolf Rd
Next What We Know About Presley Aaron’s New Single “I Wanna Know”