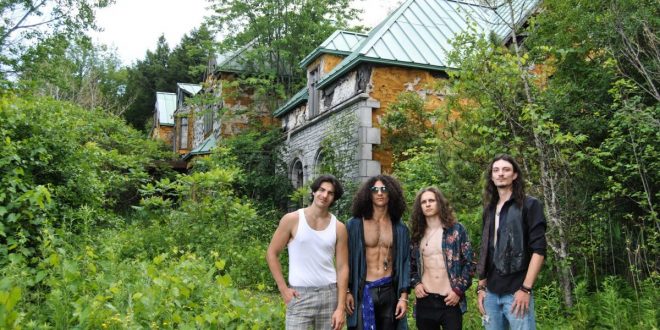 Rock has needed some new revolutionaries for a while now, and this summer, Mercury Messiah is out to prove they’ve got what it takes to bring on a new renaissance the genre needs to survive. Their debut single “Sunlight Surfing” is slated for release this coming August 20th, and while it’s hitting record store shelves at a time that has proven quite difficult for artists of all styles, this hasn’t prevented a steady stream of hype from pouring in across both sides of the Canadian-American border. Mercury Messiah’s players are experimentalists in the studio, but their style is indebted to those of the puritans who shaped hard rock’s earliest beginnings.

Vocalist Johnny Dims, guitarist Mano Diles, bassist Corrado Johnston, and drummer Alex Brunel make up the band, and while the former two have been collaborating since childhood, the chemistry all four of these musicians have is something that drives their performance style in every way. There’s no forcing the point lyrically nor sonically in their music because whatever they’re trying to say is being illustrated through the connection they share as artists. That’s what I’ve wanted to see from some of rock’s veteran talent in 2021, but to no avail thus far.

Collaborative songwriting has become less the standard in rock n’ roll today than it was just ten years ago, but Mercury Messiah doesn’t undervalue the relationship they can develop together through mutual composing duties. This is partly what makes the juggernaut “Sunlight Surfing” such a bewitching listen, being that we can tell from the start of the song that every player has a lot invested in this beyond what their instruments can add to the music. You can’t go wrong with these musical ingredients, nor the way they’re being stewed together in this band’s sound.

Their old-school ethics aside, I think that Mercury Messiah is poised to spotlight a burgeoning scene in Montreal that hasn’t been getting nearly as much love from the American press as it should in 2021. There’s a certain eclecticism that makes this style definitively northern in tone and presentation, and it’s something that I can imagine a lot of bands both at home and abroad trying to replicate in their own work (likely with mixed to negative results, being that this is as original sound as we could hope to hear in rock). When you go where no one else travels, you see things no one else ever does, and this feels like a bit of a theme in “Sunlight Surfing.”

To say there’s a lot of action in Montreal music this summer might not be doing what the scene is producing justice, but if you want a glimpse into what the city’s best in hard rock is sounding like these days, Mercury Messiah is a band you need to check out this August. “Sunlight Surfing” is a good sneak preview of what their style is all about, and if it’s just a taste of the future, I think the demand for their music is going to skyrocket in and outside of Canada in the months ahead.