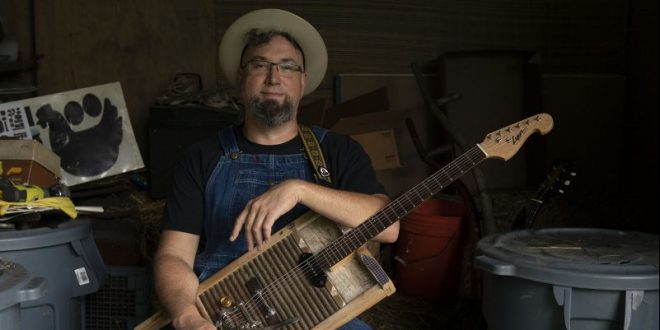 So crisp and alive with rusticity that they sound like they’ve been sourced directly off of an old Johnny Cash vinyl, the strings are our first token of scathing hellfire in the new single “Hurry Up and Die” from Dennis J. Leise, and they’re far from the last. As much as I feel like the lyrical wits of Leise steal a lot of the thunder away from his instrumental prowess in this performance, I don’t think anything could take away from the impression the guitar part makes in this song right off the bat. Structurally speaking, “Hurry Up and Die” starts off easy and only gets tighter as you push on.

“In business or elected office you’re the worst / You put everybody last and yourself first / It’s best if it be sooner than be in the bye and bye / I can’t wait for you all to hurry up and die,” we’re told by Leise in four of the more memorable verses from the track, not one bit of his delivery aching with the sarcasm you might expect it would be. There’s an antipathy here that is inescapable, and a burden impossible for him to stop bearing, but it’s through his ranting that he often sounds the most relatable.

Call it the times we’re living in or maybe just the curmudgeon in me, but the lyrical strength of “Hurry Up and Die” is perhaps made all the stronger by the homespun tone through which it’s offered to the audience. Leise puts no virtuosic ribbonry nor theatrical harmonies of any sort before his verses in this single; truth be told, I think he’s going out of his way to make the words he’s crooning the focal point of every juncture in the track. It’s a diatribe, but it starts to feel playfully decadent by its second act.

Getting into the mechanics of the song, the strings sway ever so politely behind our singer in “Hurry Up and Die,” which perhaps makes it easy to write off their contribution to the track as being foundational alone, but I think it’s much grander than that. The picking follows the pattern set forth by the verses, and a call-and-response relationship between guitarist and singer forms by the sixty-second mark in this single (even though they’re the same person). It’s retro rock n’ roll and country the same, and stimulating for anyone who likes well-produced music.

A salty throwback to a time in which the lines separating rock, country, patriotism and protest alike were simply too faint to be distinguished with any accuracy, Dennis J. Leise’s “Hurry Up and Die” is a diamond in the rough. While there might be a lot of players trying to break off something ironically retro this summer, few have the kind of creative skill Leise has to develop something as well-rounded and complete as “Hurry Up and Die” is, and if that ability can be channeled into future tracks as well, he’s going to find himself quite the stable group of followers this year.

Previous Single Review: “Voodoo” GelaX
Next Opening Up About New EP And Inspiration: Son Of Mars