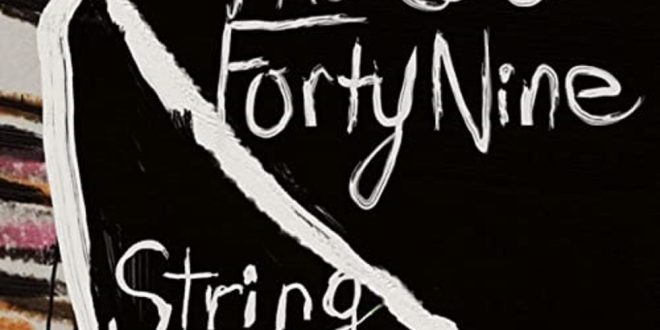 Versatility is the most important attribute any modern alternative band can have going for them, and it’s not something I hear much of in the folkier subgenres of alternative music nowadays. There’s a lot of one-dimensionality in indie-folk, but if there’s a good example worth following in the style right now, it’s being set by The Color Forty Nine in their new album String Ladders. String Ladders uses its melodic whimsy quite sparingly, accompanying lyrics with an accessible harmony only when it stresses the emotion behind their statement. It’s cutthroat and startlingly edgy, and the best record I’ve heard out of Cali this year next to Sandy’s transcendent Magic Mind LP.

As much as this album tries to be the forbidding loner in songs like “Fly On” and “What Would I Know,” its melancholy is often too relatable for its subject matter to sport the carnal nastiness of, say, a John Lennon record. There’s an honest demeanor to the lyrics in “Another World” and “String Ladder” that doesn’t let The Color Forty Nine drift deeper into the abyss while we merely sit by and witness the drowning; whether intentionally or not, this band is creating lifesavers for itself with these melodies, and using poetic humanisms to fight against the current.

I think there’s an obvious influence from The Color Forty Nine’s Californian backdrop in this record, and especially tracks like “I’m Going to Try,” “Hold My Hand,” and “Battling Down.” We’re at once within reach of cosmopolitan narratives of self-awareness mixed with observatory judgment, but at the same time trapped by the isolation of sparse instrumentation reflecting desert surroundings. The silence is the canvas even more than a beat or a particular string melody would be, which makes even minimalistic moments of expression feel like they carry the weight of the world on their shoulders.

The creative continuity in this record comes from the way The Color Forty Nine deliver their lyrics to us and not the cosmetics through which they present their harmonies, which is to say that the DIY-level production quality throughout the tracklist was intentional on all counts. You can’t make something as emotional as this record is with a thick varnish standing between the audience and the artist creating the content in the first place, and this band rightly left it out of the equation entirely rather than leaving us to sift through the sparkling for true value in the mix.

Anyone who tells you that SoCal music lost its luster because of last year’s explosive pandemic probably hasn’t been out to the coast in a while, because if they had, the music of The Color Forty Nine probably would have had them singing a very different tune. String Ladders is an ambitious album, but not an overstatement of who this group is and what they’ve come to do with their musical abilities (a rare find, in my experience as a critic). They’re outgrowing the underground rapidly, and that’s undeniable when listening to songs like String Ladder and “Another World” this July.