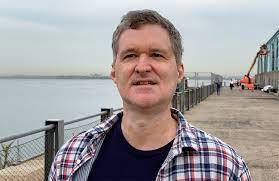 \When it comes to accurately paying homage to the past while resisting the urge to be blinded by nostalgia, there’s a lot at risk. Using your art to tackle the ghosts of the past can be a tall order and can often resurface feelings you thought were long absent, but the even tougher pill to swallow is reckoning with the amount of time that has passed between where you are now and where you came from. For multi-media artist Tod Lippy, he not only decided to use such a bold approach and concept for his new album, he decided to lift direct, literal inspiration from his yearbook for the lead single “Ambitions.”

The unashamed and audacious tactic of using the aspirations located beside his past classmates’ senior yearbook photos is one most might be afraid to do, if even out of sheer embarrassment of simply looking at their high school yearbook in general, but Lippy manages to pull the concept off with flying colors and thus gives the album a deeply relatable angle to work from right off the bat, as “Ambitions” functions as the opening track for the aptly-titled Yearbook, Lippy’s long-coming second album.

Yearbook is an album that starts with a deep dive into where one starts in life while digesting where one wants to eventually be, as “Ambitions” offers deep contrast to such goals with an electronic-tinged, dour musical backing. It functions as an anomaly against the nine songs that follow, with “More In Common” offering something far more traditional even set against Lippy’s unique vocal intonation. The piano work is gorgeous and it propels the song upwards in quality. Continuing the piano-heavy approach in “Appian Way,” a song whose tone matches the adult contemporary genre the album generally holds itself to while showcasing Lippy’s talents exquisitely.

“Body and Blood” maintains Lippy’s downtempo appeal, and the attention to harmonies both in the instrumentation (beautiful work on the flute towards the end of the track) and in Lippy’s vocals give the song a continued unique sheen, something that feels pointedly universal while still functioning as a one-of-a-kind tool in Tod Lippy’s greater toolbox. Other album standouts come in “Using You,” which picks the tempo up a bit with some fun electronic production on top of layered vocal work and rhythmic synthesizers.

Sending Yearbook out on “Undertow” works as a sendoff of massive proportions, its entire runtime building to a major finale that mixes production tricks seen across all of Yearbook up until now — the vocal buildup in the last third is a gorgeous sendoff to the time spent within Yearbook, the slow crescendo that mixes elements from a piano and electronic ingredients in vocal layering. There’s a soft underbelly to all of Yearbook that undeniably welcomes listeners to an often-ignored piece of most musicians’ psyches, but the unapologetic and unpretentious way that Lippy invites listeners into his world is something more artists will hopefully aspire to do in the future. With this brief parting glance to the past, Tod Lippy sends listeners off to the unforeseen future with nothing but his best wishes and a soundtrack to light the way.