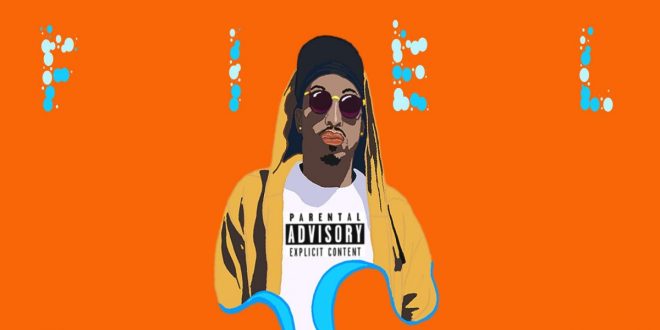 Fiel’s brand of hip-hop isn’t sample-centric, and his new single “Bubble Up” isn’t sporting a hook you’ve already heard somewhere on the FM dial earlier this year. There’s nothing recycled about the way this guy approaches the mic; from the moment he starts up a verse to the second his words retreat from view in favor of a bassline creeping out of the shadows, his swagger is within reach of the audience (and infectious as anything you’ve heard before). “Bubble Up” is more or less a celebration of his skillset – a victory lap that didn’t require running the whole race to be enjoyed, and for what this single lacks in plastic continuity, it makes up for in compositional intrigue other tracks just don’t sport on their own.

Nothing is breaking the confidence in my man’s vocal here, and I would even say that he sounds a little more comfortable with the mic in his hands in this song than he has in previous cuts.  He’s already picking up a lot more momentum on streaming platforms like Spotify than his closest rivals in and outside of the scene have this summer, and considering the translatable emotionality in “Bubble Up,” I don’t see his pop credibility getting anything but stronger as more and more people get exposed to his talents for themselves.

The bass in this mix is a little louder than I would have gone with had I been in the producer’s chair, but it doesn’t overpower the other elements in the song at all – it magnifies their charisma. Balance is one of the most important parts of any single, no matter the genre or who the artist behind its creation happens to be, and I’ve got the impression from Fiel over the past year that he isn’t about to sacrifice equilibrium for a cheap but lucrative swing so many of the melodic hip-hop releases I review wind up featuring. His is too unique a path to be corrupted by the mainstream mundane, and that’s hard to dispute when listening to “Bubble Up.”

I’m looking forward to hearing what the future holds for Fiel, and if I’m to base what his next moves are going to sound like on the diversity of his performance in “Bubble Up,” I’d say we’re going to hear even more good material out of his camp in the near future than we did leading up to this latest release. Fiel doesn’t need to prove very much to us at this point to maintain the spot he’s claimed for himself in the hierarchy of musicians working their way through the American underground this summer, but that isn’t stopping him from giving as convincing a performance as he can whenever the mood strikes him. I’ve become quite a fan this year, and I think other discriminating hip-hop buffs are going to see why in this song.