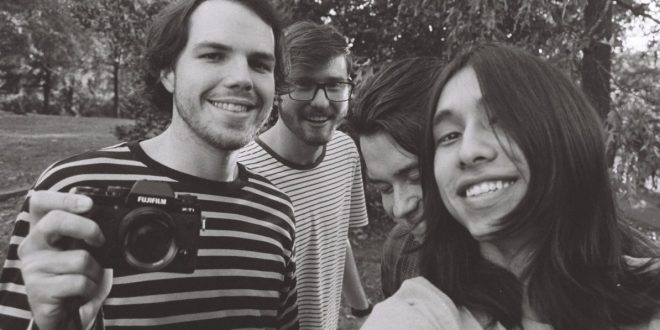 Album Review: CLOUDLAND “Where We Meet”

I think it’s pretty much the consensus that lax attitudes are not what alternative rock needs at this critical juncture in its history, and from the looks of their debut album Where We Meet, CLOUDLAND agree. From the gentle, pastoral opener “Sunday Afternoon” to the electricity-drenched picking of “Perfect Timing,” Where We Meet demands our focus not because of detail but because of the decadence the simplicity of the performances produces. These are musicians putting in a lot of soul where little has been found in contemporary content lately, and even if you’re not the type to go for indie rock normally, this summery listen is one I don’t recommend passing up.

CLOUDLAND’s vocalist has his heart between a bassline and a punishingly swift percussive entity in tracks like “Lights” and “St. Elmo,” but whether put in pressurized circumstances or left to balladry in “Sunday Afternoon” or the bashful Paul Westerberg descendant “Walking Away,” he doesn’t flinch from the challenge in front of him. Rowdy rhythms and eccentric harmonies are no match for the drive he’s got behind the microphone in these songs, which is equaled only by the devoted attack his bandmates are lending around every turn.

These lyrics are never forced to carry the weight of the emotion in “Coming Back,” “Restless,” “Overthinking,” or the title track in Where We Meet on their own but instead share the job with a well-shaped overdrive that makes the riffing in these songs ethereal in tone. There are some who would argue that punkishness of any kind – but specifically the raw, relentless variety above all others – has a sardonicism in relation to other experimental forms of contemporary rock no matter what you do with it, but I think the way CLOUDLAND extract the punk aesthetic’s rebelliousness and evolve it for their own purposes here is rather inspiring.

The way Where We Meet was mixed creates a blunt collective force in its hardest charging songs, but I think this was important to spotlight the integrity of the band as a whole as opposed to singling out particular elements of grandeur to center each song on. They’re not quite an emo band, but there’s no getting around the exposed nature of the lyrics CLOUDLAND go for in this LP, and by putting a lot of oomph in their already ample instrumental force, the authenticity of the angst in these verses can never come into question.

Where We Meet could very well be the start of something very special for the buzz-worthy CLOUDLAND, and with the relative lull in creative fireworks coming out of other scenes in the American underground this summer, I believe it’s going to do very well with the alternative rockers it was made to please. Georgia has been getting more love for its superior modern hip-hop culture than it has the rock circuit it’s played host to for generations now, but with a group of musicians as hostile towards melodic banality as CLOUDLAND are celebrating their home state through LPs like this one, that’s going to change in no time.