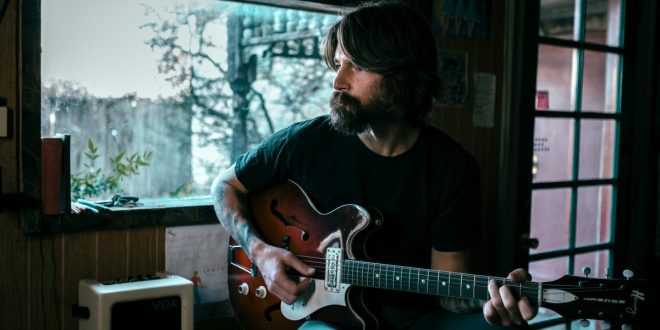 Fusing the storytelling elements of Americana with the ruggedness of rock n’ roll, John R Miller brings a little bit of everything on his new album Depreciated, out now. The Nashville-based, by the way of West Virginia, songwriter has evolved his sound over the years but now seems to be in a place of sonic peace within his new music. Music Existence spoke to Miller about his new album, recording in Nashville and playing the legendary Red Rocks Amphitheatre.

Music Existence: You’ve been getting great press coverage from large scale media outlets like Rolling Stone and Consequence of Sound recently, how has the positive feedback been for you?

John R Miller: I’m glad folks seem to be enjoying the record! It’s hard to know what to make of any of that stuff so I don’t really dwell on it, but I certainly appreciate that people are listening and giving it a shot!

ME: What was the collaboration process like working with Justin Francis and Adam Meisterhans?

JRM: It all came together very naturally. Justin and Adam are old friends and they’ve worked together on projects in the past, & Adam and I used to play in bands together in West Virginia years ago. When I had enough songs to make a new record I was pretty intentional about wanting to do it with them. Justin’s a really great engineer and Adam is one of my favorite guitar players around, and together they make a wonderful producer-duo. We all know each other really well so it was easy to communicate ideas and know when to allow for input.

ME: Can you talk about how finding both punk rock and traditional fiddle music helped craft the sound you have today?

JRM: I think for me the general non-commerciality of both of those art forms was what drew me to them when I was younger. At a glance they may not seem to have much in common, but their very core existence is predicated upon community, sharing, and an aversion to mainstream culture. I learned to play guitar in garage bands as a teenager, and I played in a traveling old-time stringband for much of my early 20s, and wrote songs for both. I play some fiddle too, and while I don’t necessarily see a direct link to what I’m currently doing song-wise, there are definitely elements from both of these things that inform everything I do.

ME: “Shenandoah Shakedown” is a complicated track reflecting on growing up in the Shenandoah Valley in West Virginia. Was this song, or any others on the album, difficult to write?

JRM: That one actually came out rather quickly compared to some others, I think I sat down to write it in an afternoon and finished it the same day. That doesn’t usually happen, I’ll usually tinker with songs for a little while before I record them, and sometimes even afterward. But that was one of the rare songs that seemed to almost write itself.

ME: Sonically speaking, “Shenandoah Shakedown” is also very intriguing and has some really interesting guitar parts on it. What was your overall goal for the guitars on this album?

JRM: I wanted the guitars to serve the songs by adding depth and dynamics, and interesting melodic choices. Adam’s one of the best guitar players going, I think, and his ideas are at the same time unique and intuitive. In the case of Shenandoah,” I love how the guitar serves as a sort of psych curtain or backdrop behind the acoustic instruments.

ME: Can you talk about the experience of recording this album at the legendary Sound Emporium in Nashville?

JRM: What an incredible place that studio is! Justin found us a time slot there and I’m so happy we were able to get in to do it. It’s a very comfortable, vibey room with accommodating space and gear, we were able to have most of the band in the same main room together with good isolation, which helped everybody gel.

ME: Describe the inspiration for the album’s title, Depreciated.

JRM: That comes from a line in one of the songs on the record, “Borrowed Time,” and I thought it served one of the album’s lead motifs well – how everything diminishes over time, and value is subjective.

ME: You begin touring next month, have you thought about how these songs will translate live on stage?

JRM: We’ve been playing a bunch of them for a little while with the same band. I was fortunate to have been able to make the record with friends & most of the folks in the road band I’ve been with for the past couple years, so the plan is essentially to just let the songs breathe as we play them night after night and try to find new shifts in the structures.

ME: You’ll also be opening for Tyler Childers at the legendary Red Rocks Amphitheatre in September, have you ever played an iconic stage like that before?

JRM: I don’t know if there is another stage or venue quite like Red Rocks in existence, really. To date I’ve never played a place even close to that size, so I’m really excited to hear how the songs translate to such a large sound.