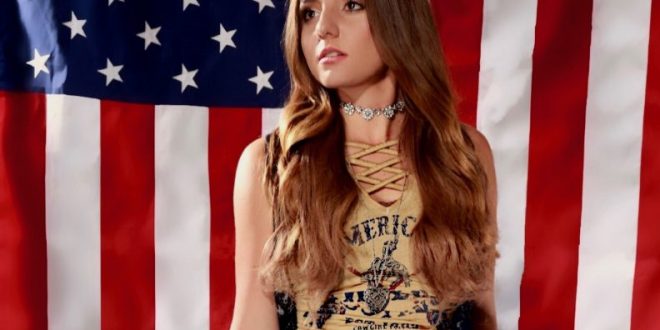 90
SHARES
FacebookTwitter
Payton Howie delivers a powerful American anthem set ablaze in resounding country twang with her newest single “Freedom.” Finding hope in the red, white, and blue, Howie moves mountains and soars to open skies like an eagle. Notably presenting guitar riffs that sound like they were lifted straight off a 90’s country song, “Freedom” travels back in time to where Howie draws her inspiration from. The song is soaked in steel guitar, along with her inspiring vocals blending together seamlessly to deliver a feeling of monumental admiration. Howie lets her vocals run as free as we are, admitting how thankful she is to have men and women overseas fighting for her freedom.
“I’m thankful for colors that don’t run, I’m proud of where I’m from,” Howie belts in the chorus, standing up for her fellow Americans in a profound way. As an avid supporter of the military, Howie will be part of the 2023 USO Tour, which teams up with entertainers to help boost morale among military members. Howie makes it clear that she won’t let her love for her country be challenged with her newest single “Freedom.”
Take a look!  https://youtu.be/l87U6eKMXns
To connect with Payton Howie, follow her on social media @paytonhowiemusic and visit her website at https://paytonhowie.com/!
Listen to “Freedom” everywhere NOW!