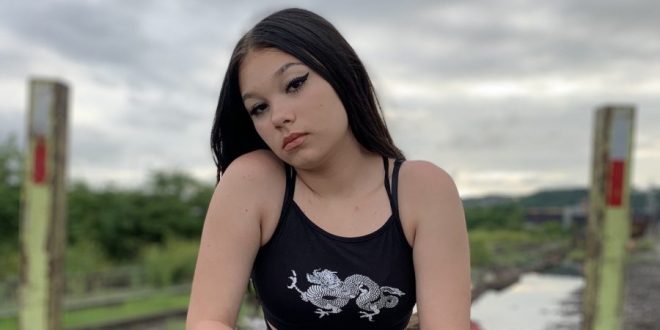 The unstoppable, 14 yr old Nevaeh Sky is releasing her long awaited debut dance single, “Get Up”. Music Lovers are describing the new song as, “Very impressive,” “Good Quality Music”. One listener from the US said, “This would do very well on the radio!” Another responded, “Gets you on the dance floor!” Between professional acting, modeling and being the Ohio Recycling Coalition’s spokesperson and eco-comic hero, “The Sky Princess”, Nevaeh has created an amazing, toe-tapping piece of art that is going to get the world up and moving!

“Get Up” is a sort of rebellious, motivational song with lyrics such as, “Here I stand before you as myself, Sick of listening to everybody else” and “Get up, get up now you gotta choose; Get up, get up No one can do it but you”. Whether it’s tapping a foot, bobbing your head or full-out dancing, this song does make it hard to sit still.

Nevaeh says, “We worked a long time to get this song perfect, I was just 12 when we wrote it. So I’m really proud of the way it turned out”.

The response has been overwhelmingly positive. A crowd review was performed using listeners from various ages, races & areas in the United States and here’s a few responses…

Male, 37 : “I immediately thought that this song would end up doing well if it were played on the radio. I thought that the woman singing the song did a really great job and I heard a lot of different influences in the song. The quality of the music was really good too. “
Female, 45 : “I found myself tapping my foot and dancing to this song. Very impressed. This is not normally the kind of music I listen to but I could see this would be a great song to play in the morning to get moving for the day. Quite motivational. Nice.”
Female, 26 : “I really like the beat and how it makes me want to dance. I also like the flow and how everything it pieces together. The chorus is catchy, and easy to learn.”
Male, 37 : “The song reminds me a bit of Rhianna, she has a good sound to it though. The song itself is also really good quality.”

The reviews are in, and it sure seems like a 5 star hit is about to make an impact on the airwaves! The rising star, Nevaeh Sky has definitely arrived. Before the official release on 7/23, be sure to subscribe to her VEVO (NevaehSkyVEVO), where the debut single will premiere on 7/16.

Nevaeh Sky’s “Get Up” will first be launched by video on her VEVO Channel, “NevaehSkyVEVO” on 7/16. The debut single will then hit online stores, Pandora, iHeart Radio and other media outlets the following week, on July 23, 2021. Nevaeh is currently doing regional radio interviews & drops to promote her new single.