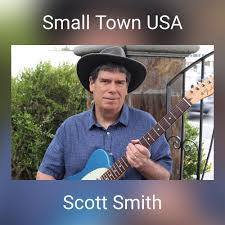 Even tempo and smooth vocal deliveries might sound like enough to make a decent pop track on paper, but when listening to a song like “Small Town U.S.A.” from singer/songwriter Scott Smith, it becomes obvious that making something unforgettable takes so much more than that. Smith is of a special class of performers exploiting the angularities of Americana in 2021, and in “Small Town U.S.A.,” he makes the harmonies framing his lyrical emissions as much a centerpiece as his actual verses are. There’s no separation between sonic poeticisms and linguistic storytelling in this single – only the soft bonds created by a musician very much in touch with his medium.

Smith’s second single out this summer, “Got a $100 Bill,” is a heavy-rocking slice of the heartland blues many had feared completely dried up at this point in history, but its melodic value doesn’t amount to that of a throwback at all. Old school as its compositional integrities might be, this song has a swinging rhythm that just begs for us to turn the volume up and get lost in the sway of the riff. My man doesn’t just straddle the groove here; he’s an embodiment of the beat, owning the verses with his voice and the thrust he puts into it.

“Got a $100 Bill” and “Small Town U.S.A.” are two of the more focused singer/songwriter efforts I’ve had the pleasure of coming across in the past couple of months, but I don’t believe they’re a complete measurement of what Scott Smith could potentially accomplish in the years to come. It’s quite clear he’s only scratching the surface in this pair of stellar singles, but if this is just a taste of what his capacity for creative depth can produce, you can bet on seeing his name and his output back in the headlines a lot sooner than later.