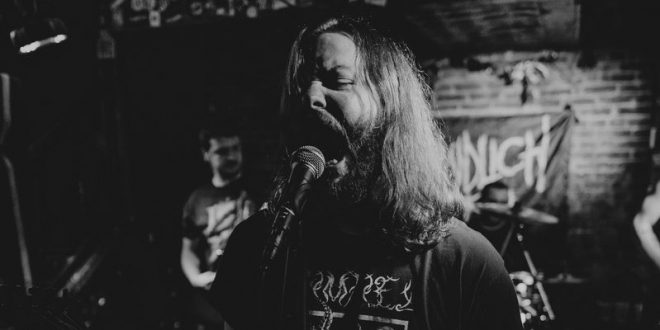 Multi-instrumentalist Michael Connors is prolifically immersed in his black metal-inspired solo project, Unendlich, having currently released three full-lengths and two EPs following its first demo, Slaves to the Illusion, which he’d debut in 2013. Marking the second half of this month, Connors released the project’s latest offering, “Into Abandonment.” It is the fourth track on his upcoming full-length, Paradox of a Broken World, which is slated for July 9th.

In terms of the song’s theme, Connors emphasizes modern society’s increasing desensitization – as he puts it, “a devolution from logical reasoning to violent reaction.” He expounds on that point with a more understandable angle, stating, “It is the entropic release of emotion when one can no longer be apathetic to the noise and routine of the world.” Amidst Connors’ grim, shrieking vocal tonality, the structure of the song provides an apt instrumental interpretation of these sentiments, featuring an initially steadfast, yet intense blast of emotive riffage. As the song progresses, its percussion shifts to that of rumbling double bass, while the guitars gradually showcase greater melodic nuance. Each solo part that follows is carefully crafted in that regard and retains form while offset by a brief clean, reverberated chord sequence before a further, brooding overdrive envelops the song’s remainder. Despite how the dystopian theme reigns dominant when considered as a whole, there’s a subtle undertone of resilience alluded to in both the thematic and structural contexts.

I come from a family who is passionate about all things music. I learned to sing at an early age, and by 13, had my very own Fender Strat guitar. I tried my hardest at learning all that I could. Because I was born with cerebral palsy, I had to teach myself an adaptive playing style. I learned to write and record my own music, despite these difficulties. In college, I started making great use of my writing abilities by reviewing music, as well as copy editing. I guess it's best to stick with what you know, while welcoming a fair challenge at the same time.
Previous Single Review: Sarantos “EyeBANGing”
Next Single Review: Tai Mistyque “Toxic”