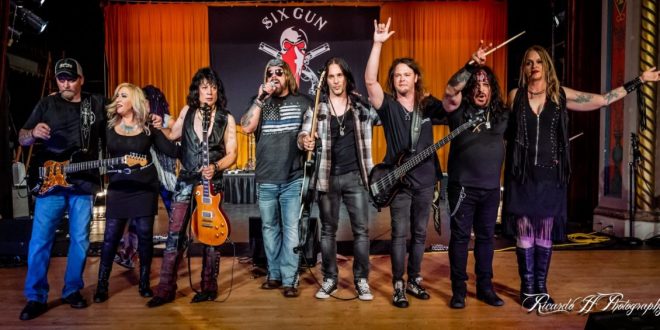 Special thanks go out to all those who attended and supported “A Night of Southern Rock” headlined by Southern Rock Band Six Gun Sal, Country Singer Kimberly Dawn, and Soul Bluegrass Artist Scott Gronsky at the Long Beach Scottish Rite Cultural Centre in Long Beach, California on May 29, 2021, Memorial Day Weekend. The concert benefited nonprofit organizations that work with homeless and disabled veterans, including the American Soldier Networks, Tickets for Troops, and One World Stage & Screen. 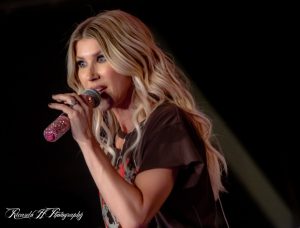 Tito Ortiz, American mixed-martial artist, politician, and a big supporter of the veterans, came out to “A Night of Southern Rock” and attended the concert. Ortiz introduced Southern Rock band Six Gun Sal on the big stage and did a moment of silence prayer to honor the fallen soldiers who have sacrificed their lives for our country. An autographed Michael Kelly guitar was given away by Six Gun Sal as a part of a raffle prize held during the concert. 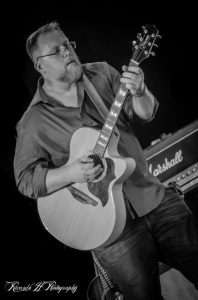 The VIP Lounge was sponsored by Double Cross Vodka and Positive Beverage who provided a signature cocktail, the ‘Brave Soldier’ with Double Cross Vodka’s premium spirit to treat talent and guests to a tropical berry libation without sugar, calories. Urban Press Winery provided red and white wine, and Hint Water was provided to everyone. Mini Birrieria provided delicious small bites all night long and Bay Cities Paving provided flowers and other items to complete the evening in the VIP Lounge.

Six Gun Sal is an L.A-based Southern Rock Band whose edgy, biker style is heard through epic anthems and ballads. Since forming in 2015, Six Gun Sal has played hundreds of shows throughout the Western U.S. and put out two full-length albums. They’ve also released world-class videos for singles including “Remember My Name,” “Red Blooded American,” and “The Life,” which won two California Music Video Awards.

Kimberly Dawn is a Canadian-born singer-songwriter who began taking piano and guitar lessons after the birth of her fourth child. She now focuses on creating inspiring music in the genre that has always spoken to her. She’s currently back in the studio writing and recording new music to release later this year, and will perform in Nashville this summer. Notable singles include Slow Dancin’ in the Dark, Cadillac Lovers, and The Bottle. Kimberly’s newly released music video “The Bottle” https://youtu.be/bnyb0EZRWYU

Scott Gronsky’s music is an eclectic fusion of sounds grounded in the values of blues, funk, jazz, and bluegrass and influenced by artists including Doc Watson, Derek Trucks, and Bob Marley. Gronsky’s original songwriting and lyrics tell stories and share compelling thoughts on “a life of love, heartbreak, the state of the world, the state of my mind, and other random experiences that connect us all together.” Gronsky is based in Orange County.

Six Gun Entertainment arranges live music events across all genres. They are the co-producers of the “First Annual Biker Run” and “A Night of Southern Rock Concert” to Benefit Veterans Memorial Day Weekend.

Built as the Scottish Rite Cathedral in 1926 this Romanesque Revival structure designated Historical Landmark #8 by the City of Long Beach. Now known as the Scottish Rite Event Center, this stately building is home of the acclaimed 800-seat Ernest Borgnine Theater. It also features many other rooms suited for various occasions. From cultural events to meetings, live entertainment, and galas, weddings this venue can host almost anything. Located only minutes from beaches, airports, the Queen Mary, and civic centers. https://www.lbscottishrite.org

Stephen Vicino is the founder of MusicExistence.com. He created this site to give talented musicians a voice and a way to be discovered.
@@svicino
Previous Nick Battle Drops The First Part of His EP Trilogy Titled “See No Evil”
Next New Breed – I95