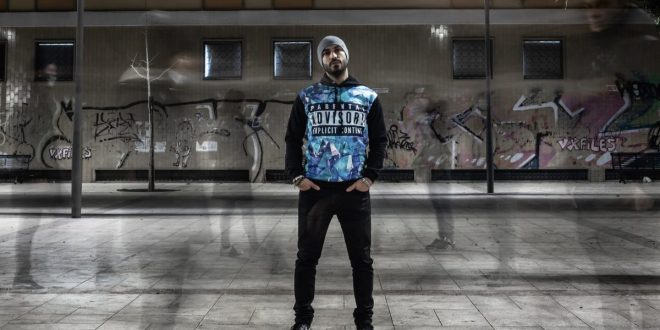 Hailing from Cagliari, Italy, MPM Producer is a modern musician who produces and mixes his own work.  His latest effort, the eight track album London Chronicles was released today. Let’s break it down track by track, shall we?

The album starts with “Venom”, and more specifically starts with MPM Producer alternating between rap stanzas in his native Italian and English before launching into a Nu- Metal style riff. The back and forth between genres and languages certainly makes for an interesting listen.

Roller Coaster is a more straight forward modern rocker that alternates between half and full tempo. The production is top notch on this track, everything sounds tight and works well together. The track also has a great hook and some great electronic elements sprinkled throughout.

“The Conformist” is MPM Producer’s latest single and it certainly seems like an attempt at mainstream radio. The song begins with a contemporary beat and we are back to the rap flow and braggadocio. That is, of course, until the song takes a hard left turn into pop punk. It’s honestly a tad off putting and the song feels like it never settles into it’s groove. A little instrumental cross-pollination would have went a long way to gluing the track together.

And we are back to singing at the half way point of the album. Again, this song has breakneck changes that leave the listener a little disoriented. Just when you think you are settling into a ballad, MPM Producer flips the switch and we are now listening to a speed punk song along the lines of NOFX or Bad Religion, then the switch flip switches again and we are in a modern rock song, and then it flips again and we are in an electro ballad. By the time the song ends, it’s hard to tell if anything even happened at all.

Track five starts with a chill, if slightly dated beat and MPM Producer rapping in his native tongue. I was starting to vibe with this one, but I found myself wincing, flinching, waiting for the hard genre shift that thankfully didn’t come this time! MPM works really well as a rapper / r&b singer and this is a nice song.

And just like that, the spell of the previous song is broken and we are suddenly knee deep in a Rise Against album. It really is jarring and makes the album hard to vibe with on any level. This track has some great production elements and is a really great song, the piano in the bridge is particularly beautiful. It would be served better on an album of similar songs.

Track seven is called “Quarantine Thoughts”. It seems like I’ve reviewed a lot of songs called something along those lines lately. And obviously, the global Pandemic is going to influence art for years. This track has an 80s new wave punk sort of vibe that I really got down on. This is my favorite song on the album. The synths are great and it has a huge hook, ready to sing along to. The outro is also a ton of fun.

The album closes with a gorgeous finger picked acoustic ballad that serves a perfect closer and is a wonderful song. It even has a sax solo!

Overall, London Chronicles is a fun, if occasionally challenging listen and a breath of fresh air. There really is nothing you can compare MPM Producer to right now but Enter Shikari, Muse and Fever 333 might be a good starting point.