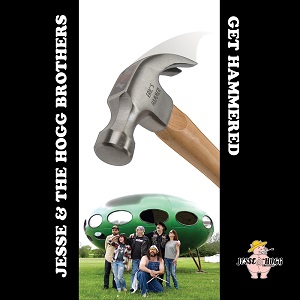 Too many recording artists struggle with taking themselves too seriously, and while a lot of people would just as soon chalk it up to ego, there’s often more to it than that. As big a problem as this can be in pop, it’s luckily not something cowpunks deluxe Jesse & The Hogg Brothers have ever had to face in their career together – and this is evidenced in a rather prideful manner in their new album Get Hammered. Released this May to the usual fanfare a group of rightly-anointed indie rock royals tend to receive, Get Hammered isn’t a love letter to hardcore Hogg fans so much as a melting pot of creativity as only hinted at in their previous releases. I actually would pose this as a new look for their brand, and one which newcomers to their music shouldn’t feel intimidated by in the least.

There’s nothing pretentious about what we encounter in songs like “Love Buckets,” “Onion Ring,” “Biker Ann,” and “Texas Hammer;” instead, there’s a selflessness between the players and a kindred joy in exploiting poetic irony that makes even the sillier and more straightforward songwriting in Get Hammered seem unsuspectingly profound. Country music in particular has felt increasingly watered-down in the past ten years, but the way Jesse & The Hogg Brothers broach its finer aesthetical points (in their own punky way that is), it feels more authentic and untethered to commercial forces. There’s Americana galore in the bones of this LP, and it never sounds even slightly politicized nor puffed-up to resemble someone else’s narrative.

Jesse & The Hogg Brothers know how to bring the heat when they need to in Get Hammered, and their emotion is never bound by the beats beneath their verses – quite the opposite, in fact. “Santa’s Got a Bag of Coal,” the plaintive “Black & Blue,” fiery “We’re All in This Together,” and record-starting one-two punch “The Hammer” and “Cream Gravy” exhibit surgical in-studio precision that balances the forcefulness of the performance with the thoughtfulness of the players (which isn’t something that you’re going to see a lot of in the other cowpunk albums due out before the end of May). Detail-oriented musicians are everywhere these days, but rarely do they produce something as pastoral and punk-fueled as this record is.

Get Hammered is just the kind of album cowpunkers needed in 2021 to feel excited about what alternative music is going to be churning out in the post-pandemic world, and while you don’t need to be a Jesse & The Hogg Brothers lifer to love their sound, the true-blue followers who have been with them since day one will likely tell you right off the bat that this isn’t a conventional look for the group at all, but an evolved one. There’s no standing still when the grooves come stampeding out of the stereo behind tracks like “The Hammer,” and if you’re in the mood for some rough-riding country-punk that doesn’t care about establishments – or rules – this album is right up your alley.

Tags Album Review get hammered jesse and the hogg brothers