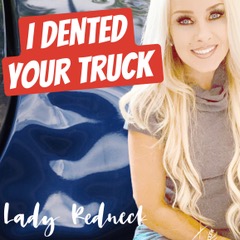 She can be described as Eartha Kitt meets Marilyn Monroe with a homespun, country twist. Those were my first thoughts when I first heard (and saw) Lady Redneck. Considering her California-esque, platinum blonde beauty, some might say she doesn’t look the part of a country songstress. However, those same people must have never heard of Dolly Parton. Looks aside, Lady Redneck is creating quite the buzz throughout the country music scene with her playful songwriting, earthy vocals and fully developed stage presence. Given her strong track record, showcased by her previous releases, it is no surprise that her upcoming single “I Dented Your Truck,” is every bit as satisfying as I was hoping it would be.

Born Stephanie Lee, Lady Redneck is no stranger to the music world. From her time playing with her family band, “Dusty Boots” to her multi-instrument capabilities, her influences can be felt all over her music. As a songwriter, composer and singer, she can most certainly be considered a triple threat. As you can probably infer by the title of her new single, “I Dented Your Truck” is a playful song with lots of charm. Utilizing her unmistakable sound, she tells the story of how she dented her man’s truck and will do anything she can to make it up to him. The instrumentation has an easy-going pace with a barroom feel. It pairs well with Lady Redneck’s sultry and steady vocals. Her voice is reminiscent of rockabilly pioneer and legend Wanda Jackson, only with a softer touch. The songwriting is unmistakably her and showcases her keen sense of humor along with her ability to not take things too seriously. A message that is both timely and needed it today’s emotionally heavy climate. The song has all the right charms that make it worthy of being blasted through a honkytonk jukebox or the speakers of a dented truck as it roars across the countryside.

Overall, “I Dented Your Truck” is a finely polished, country tune that is ready for some serious radio play. It is a solid single with plenty of heart and humor. It is the song’s character and sense of story that really make it stand out. I think the best country songs are the ones that tell a story. The story doesn’t always have to be serious either. It just has to be memorable. As memorable as the story behind a dent in a truck or a scar on the body. They both draw attention and beg to be explained.

With a solid music catalogue already in her wake, Lady Redneck has truly proven herself to be both memorable and unique. She has paid her dues and proven herself to be a tour-de-force who is worthy of both commercial success and critical acclaim. She already has a bright past and I have no doubt that her future is just as bright. If this single is any indication of the direction that her next project
is headed, then I as a country music fan cannot wait to go along for the journey.