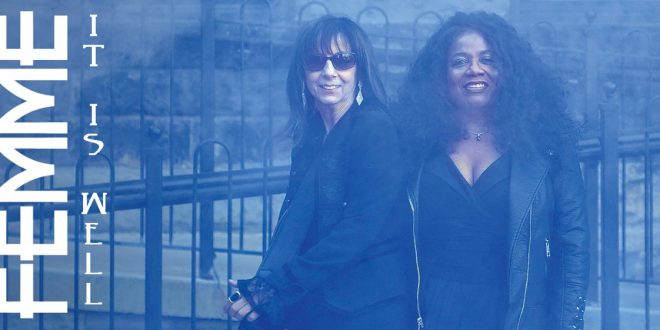 What do the words ‘soulful’ and ‘femme’ mean to you? To me, these words evoke the strength, wisdom, and vision of seminal female artists like Nina Simeone, Erykah Badu, Tina Turner, Sister Rosetta Tharpe, and Roberta Flack; this lineage is precisely what blues/funk/jazz fusion duo Soulful Femme channel with their debut album It Is Well With My Soul, joining a famed league of powerful female voices in music.

The Pittsburgh duo of vocalist Stevee Wellons and guitarist Cheryl Rinovato have been performing in the tri-state area for almost twenty-five years – Wellons, alumni of Afro-American Institute (AAMI) has perfected her on-stage presence by pouring her heart and soul into performance for over a quarter of a century, whilst Delaney-endorsed Rinovato is thrice the winner of the Jim Weber Award for blues-based musicianship during her seasoned career in and out of the studio. Their individual pedigree is unquestionable, but it wasn’t until their paths merged and Soulful Femme was formed that they began to seamlessly weave the drama of blues with the sophistication of jazz music.

Within only the first few vocal lines of the intro and album namesake ‘It Is Well With My Soul’, you understand what Soulful Femme are all about – immediately establishing Wellons’ prowess behind the microphone during the soothing acapella beginning, it also eludes to the duo’s strength of character, their sense of self, and fulfilment in their womanhood. Only 1:10 minutes in length, it serves as a subtle interlude, but encapsulates the album’s overarching theme with perfection.

Swiftly after, they begin to crank it up some – ‘Set You Free’ sees Soulful Femme at their biggest and brashest, with exaggerated horn sections and slap bass accentuating the transition to sheer funk. They effortlessly switch from dimly-lit, smoky piano bar blues on ‘Trouble’ to the stirring balladry of ‘40 Under’, to the serene jazz stylings of ‘Fearless One’, with the ethos of blues music at the band’s core – Rinovato is evidently influenced by the raw 60s British Invasion blues of Cream-era Eric Clapton, which bleeds through her precise and passionate playing style, especially on the likes of ‘Ribbon’.

“Walk a mile in my shoes / I was born to blues” Wellons wails on ‘Born To Blues’, the album’s standout track that joins together languid lounge jazz, Latin-flavored lead guitar, and introspective lyrics rooted in the traditions of blues that inextricably consigns this genre to the duo. They may have ‘the blues’, but they’re fine with it. It’s just a part of life, and makes you a stronger, more impenetrable character for it. Soulful Femme in this respect are an important female partnership, with a perspective that is not diluted but instead fortified with one authentic feminine experience.

Teaching and coaching voice at numerous CCAC college campuses in the tri-state area, Wellons not only aims to pass on her expertise, but also her experience. With It Is Well With My Soul, it’ll only help to keep that lineage of formidable female voices in music alive and thriving.

Previous Single Review: Kendall Spencer “All In”
Next RATINOFF RELEASES SONG AND VIDEO FOR “LIGHT ME UP” ON JUNE 11 FOLLOWED BY MORE NEW MUSIC THIS SUMMER AND A NEW ALBUM TITLED LET IT OUT THIS FALL