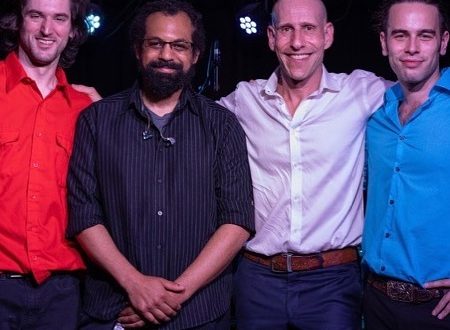 The pandemic has spawned some good things. One of those is Philadelphia’s Brian Shapiro Band. Guitarist, vocalist, and songwriter Shapiro composed eight tracks for the band’s debut studio full-length All We Can See that are, by turns, musically challenging, physically engaging, and percolating with idiosyncratic intelligence. Shapiro came together with Berklee College of Music alum and drummer Ben Kutner-Duff and bassist Ed Moman during one of the most tumultuous periods of American life in recent memory and their music reflects it; it is stylistically all over the map, not one but many things, and resists categorization. There is a masterful level of control, however, over this potentially unwieldy material.

You hear it from the first. “Three Things” simmers for a few seconds before careening out of the gate with a near-rowdy posture. It is an entertaining ride, however, further polishing some of the album’s best lyrics. Shapiro is a keen observer in his songwriting capacity and mixes it with a personal edge – each of the songs recorded for All We Can See, however outside the norm, conveys a sense of personal stakes. Guest musician Steve Davit brings a lot to the table with his sax playing.

“What’s Real” turns on a completely different aesthetic. This is much more in a singer/songwriter vein than many other cuts included on All We Can See and the coupling of Shapiro’s voice with Erica Zimmer’s classically beautiful vocals adds emotional depth. The lack of any big “solo” moments during the album might blind some listeners about the quality of the guitar work. This is one of the best performances in that vein thanks to its melodic strengths and warm sound.

The band hits listeners with some fleet-footed tempo changes during “Why Wait” and you can’t help but appreciate the restrained percussive qualities of Shapiro’s voice. You might find yourself sometimes wishing Shapiro’s production talents packed a little more oomph into these tracks. Songs such as “Why Wait” are great examples, however, of the potential these songs have for live performance.

Davit’s sax work leaves its mark on the later “Thin Skin”. The whole track is strong and comes together with an artful wallop during the chorus. Much of All We Can See’s success hinges on how well Shapiro and his cohorts orchestrate its disparate elements, but the sure songwriting hand fueling this collection seldom falters.

“Away and Away” has a loose stride once it gets going and builds up from Kutner-Duff’s hard-charging percussion alongside surging guitars. It is another example of how the Brian Shapiro Band satisfies their artistic aims while retaining a surprising level of accessibility. These are among the key points that will help sell this new act far beyond the City of Brotherly Love’s confines and garner them a wide audience. I suspect that the Brian Shapiro Band will be around for many years to come. All That We Can See is as fine of a first release as I’ve heard in the last decade and promises much, but there’s no indication they cannot deliver.

Tags Album Review all we can see brian shapiro band