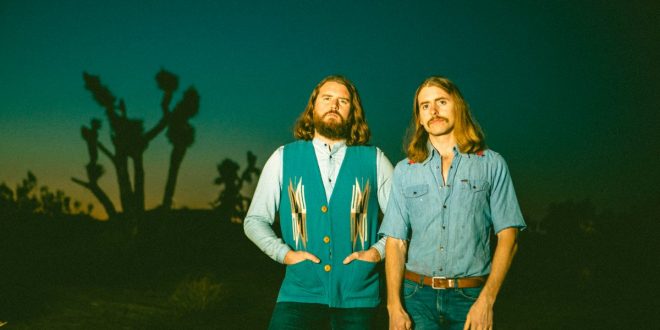 BROS, comprised of Ewan and Shamus Currie (members of multi-platinum Canadian band The Sheepdogs) have released a horn-saturated new single, “Theme From BROS” via Dine Alone Records. Vibrant and dramatic with trombone bursts over funky, foot-stomping rhythm driving the energetic track, “Theme From BROS” is a call to arms of sorts, propelling listeners to join the duo in their return to the project they launched as an alternate creative outlet beyond their main gig in 2016 with the release of their debut album VOL. 1.

Along with the action-packed single, BROS have balanced being badass with creating the change they hope to see in the world by parachuting into danger to fight crime, dropkick aliens, punch dictators, and save kittens from burning trees in under 2 and a half minutes in the quirky, animated video for “Theme From BROS,” created by Los Angeles artist and designer Rob Fidel.

“Rob is a very creative guy who is also musical and that makes all the difference when it comes to collaborating on a music-based project,” shares Ewan. “We made him a big, long list of ridiculous things that we could be doing in the video, but asked him to basically make us look like badasses. As far as I can tell, he damn well nailed it.”

Of the new track, Ewan explains, “It is inspired by our love of 70’s cop cinema and the film scores of composers like Lalo Schifrin. The opening riff was originally conceived by Shamus as an Afro-Cuban guitar line, but really came alive when orchestrated for trombone. It’s the action-packed soundtrack to the cop movie that never was.”

When Ewan and Shamus launched BROS to indulge in a little musical experimentation away from their main gig, The Sheepdogs, they had no idea that their debut album VOL. 1 would capture their dynamic creative bond, but also their tongue-in-cheek personality, playful sense of humor and easy-going relationship, and establish an entirely new identity for them. As Ewan says, “The point of BROS isn’t about anything other than Shamus and I—two guys with very diverse record collections—writing and playing the sort of music we wouldn’t get to do in any other situation.”