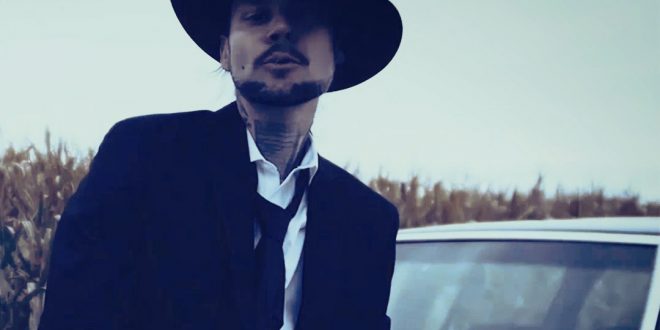 Indianapolis, IN based wordsmith and producer Doe Dillinger is back with his latest single, the genre blending track “Marooned”. The  hip hop/ pop crossover track features Natalie Erez as well as Joey Boswell. Musically, “Marooned” seamlessly blends lyrical hip hop, trip hop and elements of more mainstream pop.  Lyrically, the track tackles the feelings of loneliness and isolation. “For me, “Marooned” is basically about feeling “alone”,” explains Dillinger, “Being alone even when you’re surrounded by other people, because of your perspective.”

he single is part of the “Falling Down” EP released in February of 2021. The EP is a collaboration between Dillinger and Songwriters & Gunfighters.

Along with the single, Dillinger released a futuristic music video, which you can view below!

Doe Dillinger is an “out the box” artist; mixing Rap, Post Rock, Ambient, and even Celtic music into a unique audio gumbo. Always keeping the subject matter and lyrics close to heart, and honest. Able to provide a real prospective from an outlaw’s lifestyle, capturing his past in vivid verbal-painted pictures, rhythmically bouncing over beat and melody. Being from the Midwest he grew up listening to rap artists like Bone Thugs-N-Harmony, Do or Die, and Nelly. Along with 80’s rock bands, blaring from his mother’s bedroom; such as Guns ‘N Roses, Def Leopard, and Metallica.

By the age of 17 he decided to start creating some himself, and by 19 had joined a rap group called Street Life Cartel. Releasing three albums together before the strain of the lifestyle eventually took its toll on members, constantly in and out of incarceration (himself included), and deciding to go solo. Since 2012 Doe has released 6 projects, including the latest “Falling Down”. A rap-n-roll EP blending guitars, live drums, synths and 808s into a spiritual journey, climbing Jacob’s ladder. Describing what it’s like to leave a drama filled past full of bad choices behind in hopes of becoming a good man, and good father for his son. Now looking toward the future determined to carve his own lane, with his own sound, and to continue making music with a positive message of bettering yourself. In an age where most “popular” music seems to glorify self-destruction you’ve got to stand for something, or fall for anything.