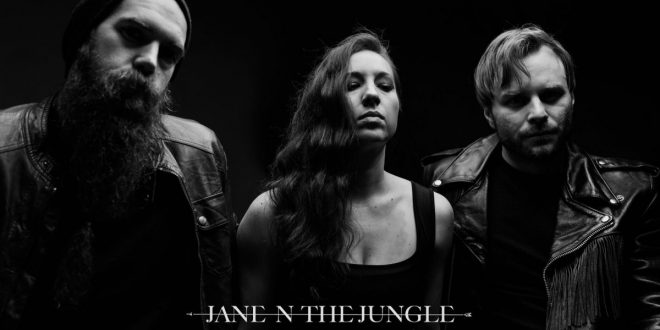 In “Trouble,” the latest single from acclaimed Arizonan rockers Jane n’ the Jungle, the pummeling of the percussion and the electrifying howl of the guitar are no match for the majestic singing of the band’s frontwoman, whose every word is burned into the riff beneath it in an instant after being uttered. “Trouble” is neither all-metal nor entirely hard rock, but occupies a space between the two quite comfortably. Aesthetically, it’s a hybrid wholeheartedly true to the classic rock identity that came before its creators, but to say its appeal is limited to the headbangin’ crowd exclusively might be doing Jane n’ the Jungle’s achievement here an injustice.

The music video for the song flirts with some familiar alternative rock themes without devolving entirely into the camp of a conventional storyline, with its best moments inarguably coming in the form of the band’s fiery live performance. They’ve got a chemistry that bleeds through the screen and makes us want to draw a little closer to their energy, if for no other reason than to absorb some of the sparks coming off of their grinding gears. It’s intense and surprisingly relaxing, adding to the addictiveness of the overall sound we’re getting in “Trouble.”

After years of winning hearts in the southwestern rock underground, I think it would be appropriate to say Jane n’ the Jungle sound like a band that has outgrown their insular scene in this most recent studio release. They’re coming off like a rock syndicate very much on the cusp of breaking through on an international level, and if the momentum this single and its music video are creating can last through the summer and into a worldwide return to live music, we’ll have only heard the beginning of the hype these players will enjoy. Jane n’ the Jungle are making big strides here, and anyone can tell that in this track.