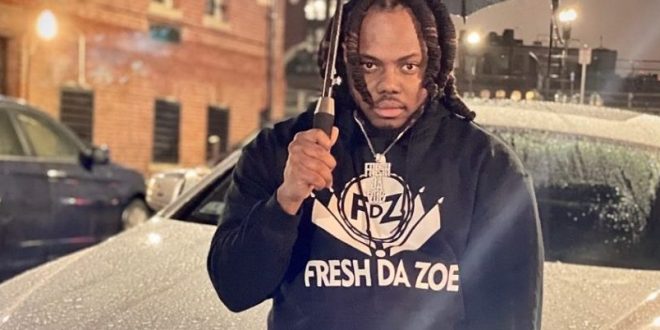 Stripped of the cosmetic varnish a lot of his contemporaries tend to overuse when composing something similarly hook-centered, Fresh Da Zoe’s “No Sleep” is definitively fat-free in a way hip-hop often tends to thrive under. Creatively speaking, there’s nothing about this single or its music video that necessarily feels lacking in features, but what it doesn’t contain is a recycled robotic groove too often abused in crossover trap (with little to write home about at the end of the day). “No Sleep” isn’t about fitting in with the crowd; if anything, it’s about blazing a trail entirely independent from the mainstream – and succeeding along the way.

The imagery we find in the music video for this track is, much like its source material, missing some of the over the top bravado I’ve gotten too used to singing in a lot newer rap output in the past year, with its core vitality derived more from aesthetical juxtaposition than overt contrast. Fresh Da Zoe wants us to appreciate his simplicity whilst acknowledging the elements of indulgence he does allow into his artistry, and if the primary goal was to present this duality without looking predictably pretentious in the visuals here, he couldn’t have done a better job.

This lead vocal is absolutely the tensest part we’ve got in the mix, but I don’t get the feeling Fresh Da Zoe was going out of his way to make his voice a pressurized force. The production style itself actually affords his style of verse a lot of authenticity and unfiltered, organic qualities that more synthetic players wouldn’t have been able to work into their own content, and if this is giving us any sort of an indication as to the level of heat he can bring on stage, his live act is going to pop off in a big way in the post-pandemic world.

Although it should be said that the percussion is rather understated in “No Sleep,” the nimbleness of Fresh Da Zoe’s execution makes it possible for him to achieve the same cathartic release at the climax of the song without much heaviness out of the beat at all. When you’re working with the multidimensionality an artist like this one has, it allows for things to get a little more experimental in the studio when it really counts for something, and thus, this latest single exemplifies why so many indie fans are getting into this rapper right now.

The 2020s just might be the best era in hip-hop history to date, and if you need something to support this notion, you really don’t need to look much further than the American underground and up-and-comers like Fresh Da Zoe, who are pushing the genre forward in a number of ways that critics like myself are more than happy to embrace. “No Sleep” makes it clear that he isn’t in this game just to start a provocative conversation about the future of rap culture; he’s playing for keeps, and that’s what his performance here tells me.

Previous Single Review: Grey DeLisle “Tonight You Belong To Me”
Next New Single “People Like you” by Sarah Weber