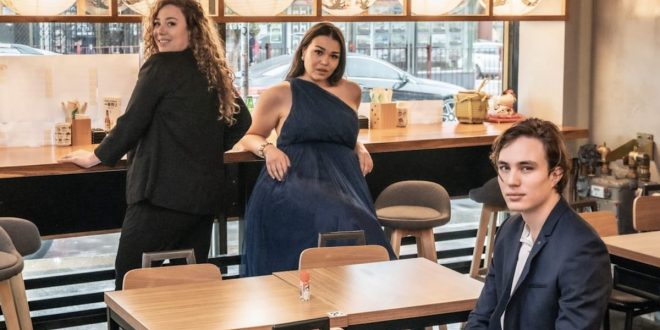 STORM & STONE REVEAL NEW SINGLE ‘TOWN THAT MADE ME’

Talented siblings Storm & Stone are set to make waves in both music and cinematic circles with their new single ‘Town That Made Me’, released today. When Pitchfork Media notices you and they write “bands like Storm & Stone are blurring the lines between genres, creating new fans for both in the process”, you know you are headed for big things.

Storm & Stone comprises Auriel, Hallelujah and August. They made their start in their modest home on the Blue Mountains of NSW, sharing a rich cultural blend of Hungarian, Scottish and Thai heritage, raised on a diverse set of influences that are underpinned by Dolly Parton and Led Zeppelin. Each sibling began learning music from a precociously young age and together they bring those close family bonds and strong work ethic to their music to create something that is rich in harmony and is deeply special. Their musical journey has seen the girls August and Auriel travel to Europe, supplied vocals for some Icelandic EDM tracks, meeting record producers and aspiring filmmakers along the way.

‘Town That Made Me’ is a reflection on those close family ties and formative influences that have shaped the band’s music. They say: “This song is a tribute to the people that made us. Our family and everyone that made a difference in our lives. It’s about the town that we were born in and the people who raised us.”

The single was recorded at A Sharp Recording Studio & Kiln Studios, and was produced, mixed & engineered by Matt ‘Xiro’ Fioravanti (Kwame, Phil Fresh & Bread Club).  The track was also mastered by A Sharp Studios, Richard Lake.  ‘Town That Made Me’ has already taken on a life of its own. The song was a finalist in the Song of the Year International Songwriting Competition, and it also slated to be a key part of the new Australian feature film ‘Love You Like That’, due out later in 2021.

‘Love You Like That’ is a film that is perfectly suited to having ‘Town That Made Me’ in its soundtrack. Hallelujah says: “The narrative of the film holds a lot of parallels to our song. Community, family and love are all central themes to it. It felt like a moment that tapped into the place and people we grew up with and truly represents a lot of people’s hometowns”.

The music video was produced by Glasshouse Productions, shot by Bards Eye View in association with the upcoming release of the feature film ‘Love You Like That’. Hallelujah says: “This music video felt like the perfect way for us to collaborate with the producer and director to feature the town and ensemble in the film as a representation of our own hometown. There were parallels in the film about the many forms of love that can happen in people’s everyday lives within a town and our 2nd single ‘Town That Made Me’ being about the place & people that helped make us who we are as a band.”

Storm & Stone have already received considerable exposure for their debut single ‘Bad’, which to date has had over 28K streams on Spotify, and the single also gained international notice from media outlets such as Pitchfork Media, StepKid Music Blog and Musikholics.com. Pitchfork Media gushingly wrote “The musicians are offering limitless creativity as well as strong communicative energy. Everything that we need and that you will unconditionally love. So don’t waste a second, and head [over] to discover ‘Bad’.”

Storm & Stone are beginning to take their small town influences to the world with ‘Town That Made Me’. Their down-to-earth songwriting, strong melodies and uncanny harmonies that only siblings can create, are sure to charm their way into listener’s and cinema-goer’s hearts everywhere.

Stephen Vicino is the founder of MusicExistence.com. He created this site to give talented musicians a voice and a way to be discovered.
@@svicino
Previous Main Hero Releases Debut EP “Lonely Road”
Next No Introduction Necessary For Bredd Phoxx