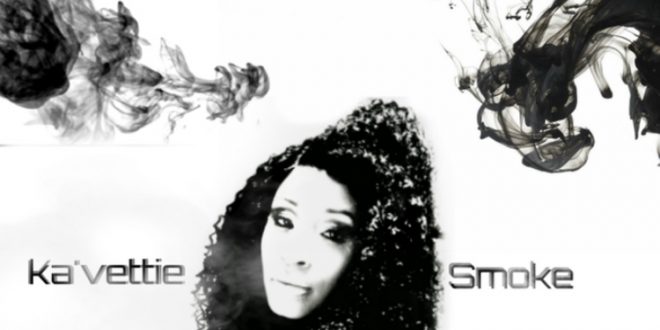 Ka’Vettie Smoke is an American R&B singer and songwriter, born in Danville,Va. She broke into the scene last  Summer with the #1 charting song, “Damn You”. Now she’s back with hit single called “I Don’t Care”  from her upcoming album  “My Diagram” on Coldhouse Records.

Hailing from Danville VA, KaVettie Smoke was a big talent in a small city, anyone that had the pleasure of hearing her sing at church or lead in the group Gospel Of Together knew one day she would reach stardom! As she matured  so did her talent and sound, as heard in her cover of Prince’s Do Me Baby along with her original song Do Me Baby.  Life situations with love, loss and motherhood trails made her into the songstress she is today. Her vocal prowess is innovative and fresh soon to the Top of the POPS and the charts, under the direction of Coldhouse Records KaVettie Smoke is ready to reintroduce herself to the world so they better be ready for KaVettie Smoke!

From Ka’Vettie herself… “The inspiration from the song “I Don’t Care” comes from a woman or a man finding real love after going through the motions of being hurt in the past from bad relationships. This song brings inspiration that one day you will find your true love and find peace at the same time. Overall it’s a love story that I pray many will find”

Follow on social media too for the latest updates

ABOUT COLDHOUSE RECORDS:   Coldhouse Records, Inc. was founded in 1989 under leadership of the CEO and President, Ivan Dailey and Vice President Timothy D. Allen. After working many years in the music business, this dynamic duo formed the group the Top Dawgs, their first album, “Who’s Doggen Who?” put Coldhouse Records Inc. on the map to stardom. This awesome team shot their first video in Danville, VA in 1996. The video made it on the big screen, BET, VH1 and the Billboard Charts. Also in 1996 Coldhouse Records signed a major distribution deal with Solar Records in California, and sold 150,000 units worldwide. In 2001, Coldhouse signed yet another major distribution deal. This time it was with SMG, Inc. from California. Coldhouse Records were at the top of their game and signed a deal with FYE out of New York. In 2003, Coldhouse Records, Inc. ventured into a new territory when they represented 10 year old Ke Ke Palmer from Chicago, IL.

Through negotiations, preparation and promotions, Coldhouse Records, Inc. played an instrumental part of Ke Ke making it to the big screen and playing in the Box Office Hit, “BarberShop 2” along with Oscar Award Winner Queen Latafah. In 2003, Coldhouse signed a television commercial deal with the American Broadcasting Company (ABC). Coldhouse wrote the theme song for the ABC’s sitcom “Knock First” which can be seen Monday through Friday at 5:30PM on The Family Channel. Coldhouse Records, Inc. is the only African American owned and operated independent major distribution company in the United States. To date, Coldhouse Records has worked with great names such as Master P., E-40, Nelly, Top Authority, Tina Moore, Lunatics, The Top Dawgs, Section-8 Mob, The Soul Dawgs, Choobakka, Temekig, Donica, The Headbangaz, and Snoop Dogg. Coldhouse Records, Inc. still demonstrating their eagerness and versatility is now a nationally and internationally distribution company. Currently Coldhouse Records services over 10,000 major stores, Mom & Pops stores worldwide. In 2004 Coldhouse records launched a deal by producing the Theme song “Fly Hair Do’ performed by The Souldawgs for the production Film company NU-GAME FILMS out of St. louis Missouri, which landed a distribution deal through York entertainment out of California, which the title track movie is called “Hair Doo U”, which sold a lot of Dvd units through Blockbuster, Movie Starz and other movie networks through the nation, then after having the success through York Entertainment they landed a Media network deal through Hbo, Starz, Bet, Cinemax which can be seen on all the network channels in the country.

In 2007 Coldhouse records Management signed 7 years old, Alisha Williamson to there roster for being an actress, she has been on Good Morning America, Fox network, Montel Williams Show, Inside Edition, Tru Tv, and several news paper ads across the country, she will soon be playing the star role The little Rascals ,Produced and Directed by Tim Greene Films out of California. The top dawgs are back with their anticipated album “Now or Never” Featuring the smash hit “Whuz -N- Those Jeans”. This hot track will keep you partying all night long with the ladies, and the catchy hook “whuz n those jeans” will keep you saying it to the ladies for days. The boys from Va. are back!! COLDHOUSE RECORDS OVERVIEW The mission of the Coldhouse Records Company (Coldhouse) is to establish a successful distribution company that offers record labels ownership to young creative individuals with entrepreneurial desires, moderate financial resources and talent scout ability. The record companies distributed by Coldhouse Records, Inc. (�Distributed Labels�) will deliver commercially ready product for distribution and sale. The product will consist of material recorded by the owner/artist and/or their talent discoveries. Coldhouse Records, Inc. will provide all administrative services necessary to achieve commercial release and distribution of the product. Owners of distributed labels will work closely with the company’s staff and receive a detailed explanation of and training in record business procedures as they are executed. In the initial phase of operation, manufacturing and distribution of records will be subcontracted to existing independent records, manufacturers and distributors. Coldhouse, Inc. will establish its own pressing system and phase in these operations. In 2012 Coldhouse records lauched a deal with Copaid Entertainment and together they are the National Campaign for Barack Obama theme song ” Barack Obama best song 2012″ Were moving forward” performed by “Parks Stewart” also he done another track called : I believe in Unity which was downloaded on youtube video 2.3 million hits in 3 months.

For more info and updates follow Coldhouse on social media