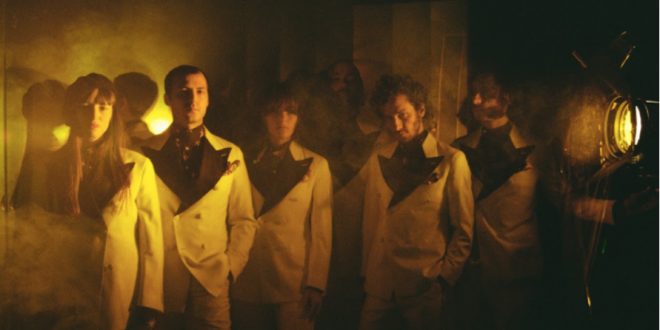 When alternative psych-rockers La Femme formed in 2010, founders Sacha Got and Marlon Magnée decided that touring and travelling the globe would be a constant inspiration for the band going forward. They have pulled influenced from countries and cultures all over the world and have created a unique amalgamation of sound for their third LP Paradigmes, out April 2. Music Existence spoke to Got about the band’s evolution and what inspired them most for the new album.

ME: It’s often said a band’s third album is their chance to experiment and break free of the sound fans may be familiar with. Do you consider Paradigmes a big shift from your first two albums?

SG: I think it’s the same continuity in the process, we tried a lot of stuff and it’s very eclectic, like in our previous record, Mystère. Maybe more on this one.

ME: Can you talk about how travelling and touring influenced the worldly sound of this record?

SG: Yes it’s true, it’s a backpacker record. We did it in different moments in different cities, in USA, France and Spain. You can hear some influence of those spaces in the record. But also other places like Turkey or Germany. We love to travel and get inspired by the local folkloric music.

ME: You see a lot of international artists and bands using themes of American-idealism in their work. What is it about the American social landscape that creates such good writing material?

SG: I think we don’t ideal anymore the USA, but it’s true it’s an amazing country for music. Each town has a sound and a proper scene. Like you go in Memphis for the country, in New Orleans for the jazz, in California for psych or in Detroit for electronic/house. It’s crazy how the mood of places influences the music.

ME: “Lacher de Chevaux” creates a very cinematic experience for the listener. Were you inspired by the Spaghetti Western films of the 1960’s?

ME: Your album’s don’t often have a linear storyline or narrative but instead each track is its own stand-alone composition. Why do you think that works well for your albums?

SG: We do that by the forces of the things. We would love to have a concept but finally for the record we put out, it’s just an eclectic mix of all the style that we love.

ME: The band has always worked with various collaborators and musicians. What draws you to consistently wanting to work with new people?

ME: The trade-off between male and female vocals on the album is great, it keeps the album captivating! How do you know when it’s right to have a female vocalist on a track opposed to a male?

SG: Most of the time we begin with our male voice. When we like it, we keep it. If not we make them songs by girls. Sometime, it depends of the point of view and what you talk in the song too.

ME: The band won’t be able to tour this record internationally for a while. How do you plan on celebrating the new album without live shows?

SG: I don’t know, I think we gonna make a small party together and get drunk. Watching the world going nuts.

*Interview has been condensed and edited for publication purposes