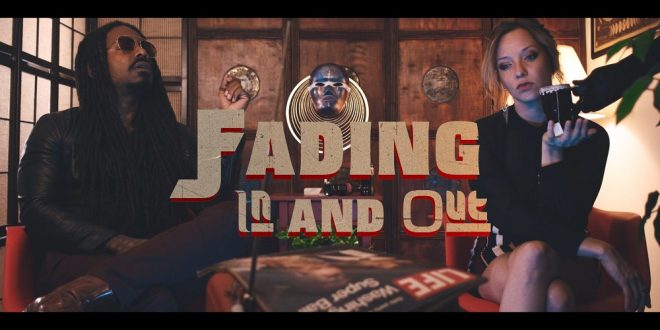 Boy Indigo is a Sacramento, California quartet consisting of singer/guitarist Devon Blue, bassist Chelsea Baker, saxophonist Kevin Kinsella, and multi-instrumentalist John Takanikos. The band debuted in 2019 with their best-known single “April 1969,” in collaboration with Kinsella’s other band, PointDexter, before releasing more than a half dozen well-performing singles in 2020. Last week, the band premiered their first single for 2021, “Fading in and Out,” which was released with an accompanying music video.

Initiated by a seemingly tranquil, psychedelic foundation, the sonic aspect of “Fading in and Out” makes ideal involvement for a retro-themed visual experience, complete with Pulp Fiction-esque typeface in the video’s credits and complementarily bold, vivid color tones showcased throughout. Blue’s vocal style is a silky, yet competent pacer for the song’s rhythmic progression, as well as it conjunctively encapsulates two perspectives of nostalgia – the immediate, fond odes to early 90s neo-noir atmosphere, and a subtle allusion to the reopening of old wounds. Especially considering the latter perspective, it is a clear aspect in line with the song’s thematic direction, centering on the latent anxiety one experiences while falling back into comfort once perceived as nurturing. The song’s production is refreshingly imaginative, particularly in terms of how the synths and percussion blend together, and round out the presentation’s sentiments as a whole.

I come from a family who is passionate about all things music. I learned to sing at an early age, and by 13, had my very own Fender Strat guitar. I tried my hardest at learning all that I could. Because I was born with cerebral palsy, I had to teach myself an adaptive playing style. I learned to write and record my own music, despite these difficulties. In college, I started making great use of my writing abilities by reviewing music, as well as copy editing. I guess it's best to stick with what you know, while welcoming a fair challenge at the same time.
Previous Top 20 iTunes Artist Mauri Dark Releases New Music Video Featuring Daughter
Next Grammys 2021: Women Sweep Awards