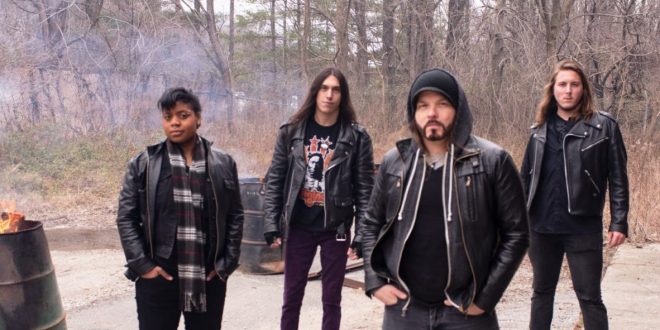 There’s nothing quite like feeling the intensity of a band’s play up close, and though it might be a little while before we get to see Silvertung play their new single “You’re Fine” on stage, they give us as intimate performance as they can muster in the music video for the track, which is currently out and kicking up a storm online this March. Silvertung are striking out of the shadows after more than a half-decade of refining their skills in Baltimore’s incredibly competitive metal underground, and from where I sit, it would appear they plan on unleashing a hurricane with every riff they record.

If the music video for “You’re Fine” doesn’t clarify the priorities this band holds dear, the bones of the song itself should. There are more than a couple of commonalities between the structure here and what one would find in a classic progressive metal single, but with one defining difference – everything in this track is so much tighter than what the status quo calls for. This isn’t a group that wants to recycle someone else’s rock n’ roll dreams with their talent; they have a story to tell, and it’s coming to life before our eyes in this performance.

I never know what to expect out of the rock acts that I have the chance to review as a professional critic these days given how diverse the alternative genre has become just in the past twenty years alone, but my fellow heavy music aficionados have nothing to fear – Silvertung are the real deal. “You’re Fine” is a homerun of a song that does everything a good hard rocker should and then some, and whether it finds its way onto mainstream radio in the coming months or not, it’s definitely setting the tone for what’s soon to come in this band’s discography.

Previous Album Review: The Impersonators “Life Of Grant”
Next Single Review: Estani “Droughts in the Ocean”