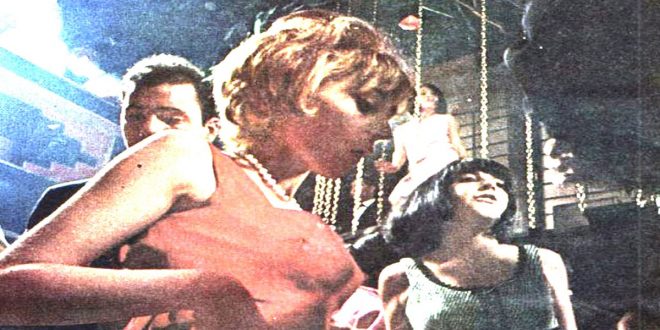 “A Fascinating Listen” – MusicExistence.com
“Manhattan’s Avant Garde would be proud of you!” – Pete Thomas, drummer for Elvis Costello

With their latest album, “This Wicked Pantomime,” the UK pop/rock duo of Neil Fitzsimon and Bee Brogan (FaB) have managed to hit the iTunes charts at home and abroad with no less than 3 singles. “A Toy For Juliette,” released in late 2020 reached the top of the South Africa iTunes Rock songs chart, while second single, “Persuasion” hit the UK Top 50. With the release of a third single, “Dancing Partner,” FaB have their highest charting UK hit at #17. The single features the talents of Elvis Costello’s long-time drummer, Pete Thomas.

Neil Fitzsimon describes “Dancing Partner:” “The track is a tribute to all those New York bands like Blondie, The Ramones, and all those bands that played at the CBCG’s back in the 1970s. It’s about the rites of passage, that everyone goes through in the process of growing up, and that the dance floor can be one of the loneliest places in the world – a ritual that Bee and myself personally found terrifying!”

ABOUT FaB: At the crossroads where Bowie meets the Beatles and Elvis Costello meets The Smiths, you will find UK-based pop duo, FaB (Fitzsimon and Brogan.) Preferring to remain faceless in an industry that holds image in high regard, FaB have gone on to form a songwriting/production partnership that led to placement of their songs in Film and TV, including a USA Sci-Fi Feature Film. They also wrote a musical, Jack Dagger, which was showcased at the Greenwich Theatre, London for the Musical Futures Award. It was also showcased at the Bridewell and the Royal College of Music in London.

The duo have previously had two #1 iTunes singles in Belgium and South Africa. The Billboard Magazine Emerging Artists have been featured on the NBC Radio and Westwood One Radio networks, as well as ABC, FOX, CBS and NBC news.