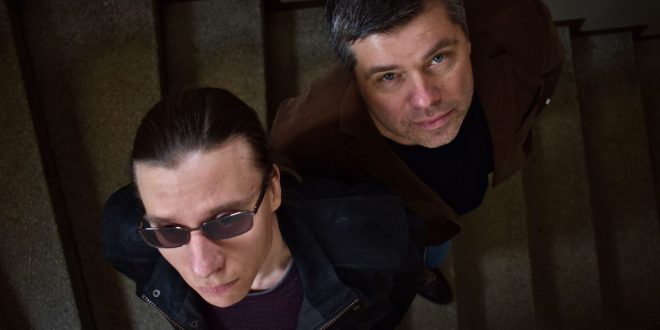 “Scarlet Hell’ is an incredibly groovy pop-rock song, with rhythms that can only be described as “suave” (or perhaps sexy?)” – Indie-Music

Since the inception of power pop duo, The Impersonators in 2017, the Finnish act has released no less than 2 EPs and 7 singles. One of those singles, 2020’s “Rodeo” reached #1 on the international iTunes pop charts, racking up more than 25K Spotify streams. All totaled, the pairing of Tom Tikka & Antti Autio have amassed more than 200K plays on Spotify. Now, going on their 4th year together. Tikka & Autio are releasing their first full-length collection, a rock opera concept album of sorts, “Life Of Grant.”

The album tells the life story of a fictional character called Grant, who is loosely based on Tom Tikka’s dad and godfather, a marine and merchant marine, two men scarred by war. According to Tikka, “These guys struggled with each and every relationship they ever had, every job, every new city…they hated change but yet couldn’t live without it. This album is the story of Grant’s life from the perspective of his relationships, most importantly his two marriages, the latter of which was happy and continues to this day. The album takes the listener from Grant’s youth and his first relationship rodeo to his golden years in San Francisco, where he resides now, still on cloud nine with his wife of more than thirty years, Charlotte.”

Consisting of 11 tracks, “Life Of Grant” will be released on March 26th, 2021. Among the songs are the aforementioned chart-topper, “Rodeo,” as well as several of The Impersonators’ previously released singles. Among the new tracks is their current single and video, “Scarlet Hell.” “Life Of Grant” was produced by Janne Saksa.

“Time flies! And yet I can remember it all like yesterday,” recalls Tikka, when asked about the creation of The Impersonators. “I was on my couch in Helsinki, freshly divorced and also recovering from the break-up of Carmen Gray, a band whose entire catalog I had written with my brother Lappe Holopainen. Gone was the support of Sony/BMG and Warner. I thought about hanging up my six-string. Just then my phone beeped. It was a text from a friend of mine, one Antti Autio.’

“The text was a poem titled ‘Ghost Town Radio.’ It was absolutely brilliant. I ran to my bedroom, got my acoustic guitar and wrote a melody to Antti’s lines. With that text and that song, we became blood brothers of sorts and two halves of a duo called, The Impersonators. And now finally, after many turns on this winding road called life, we are releasing our first full-length album titled ‘Life Of Grant.”

ABOUT THE IMPERSONATORS: Despite their poignant lyrics, The Impersonators are still a joyous and sweet proposition, with their vocal harmonies and chiming chords harking back to such 60s pop majesties as The Beatles, The Byrds and The Beach Boys. Together with their secret weapon, producer Janne Saksa, The Impersonators craft their lyrics and melodies into retro-flavoured “alternative pop/rock”. While adding a modern twist to the final soundscape, their goal is to nurture and cultivate the creativity, spirit, and warmth that graced the pop records of yesteryears.