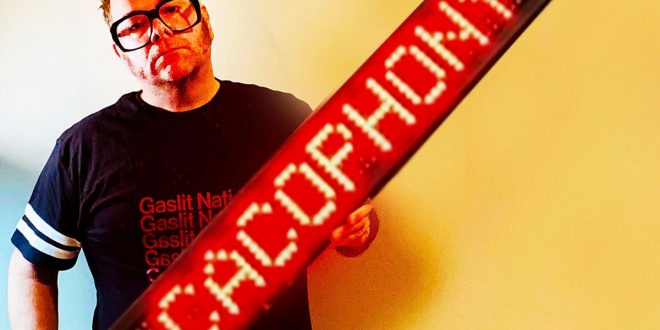 If you’re Greg Hoy, the power trio format is all you need to kick up a sonic storm in a song like “Cacophony,” and rightly he doesn’t invite anything else into the mix of this hot new alternative rock jam. Forget the synths, the auto-tune, the conceptual post-whatever designs; spellbinding melodies and ferocious beats are here to stay in Hoy’s universe, and in “Cacophony” he makes an argument for the preservation of true rock before it’s too late for the storied genre. He’s sold me on this sound, and I don’t think I’m the only listener saying so right now.

In the fifteen years he’s been in the business of making hard-hitting music, Hoy has never leaned on artificiality in driving home a brutish groove, and in this sense he hasn’t changed one iota in this performance versus his earliest work. The beat here is enormous and a bit overpowering at times, but it has to be in order to withstand the growl of the guitar as he forces one chord into the other aggressively. This is purposeful angst at its most refined – as it has to be to suit the taste of Gen Z and Millennial audiences the same.

Whether you’re a longtime follower or just found out about him today, Greg Hoy’s music needs to be on your stereo this year if you love untainted rock charisma. “Cacophony” and the record it shares its title with are, in many ways, a blast from the past it’s okay to get excited about. It’s rock music that isn’t created with rocket science – nor the pretentiousness of those who would dare to try as much – and for all that it lacks in grandiosity it compensates us for in a rich authenticity that has become incredibly difficult to come by in 2021.