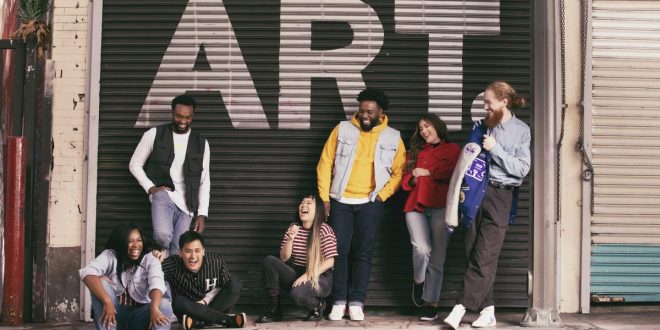 One House Worship is an eclectic camp of writers, producers, and cutting-edge creatives, founded by best selling authors and pastors of The Potter’s House at One LA and Denver, Touré Roberts and Sarah Jakes Roberts. The group’s gospel sound combines a diverse scope of influences – from soul, to rock, to pop – and similarly broad, yet direct lyrical leanings not typically explored in Contemporary Christian Music. To put their stamp on the new decade, they created three long-form tracks that comprise their pandemic-centered debut EP, He Always Provides. According to Touré, the EP was created “as a way to stir hope and inspiration in the midst of an unfamiliar time.” His sentiment could not be more relevant.

Opening on the track “Battle,” its first several minutes are enough to establish both the instrumental atmosphere and vocal prowess. Hard rock guitars blend beautifully alongside silky, vibrant synth pads, while male and female vocals are set on each of its singing phases and fill them with matching intensity. Thematically speaking, both singers discuss the nature of this journey – one angle from the perspective of the believer, and one of God, but implemented in a subtler way than what is commonly expressed, which is admirable.

The viral hit titular track to follow, led by Chandler Moore, plays like an extended hymn, with visibility of synth and guitar textures as it progresses. Toward the halfway point, the message of the song resonates especially, feeling fuller each time with the increased presence of accompaniment. Its remainder showcases a distinctive break-off point between the vocals, and the attention to detail in that section’s call-and-response aspect makes it worthy of its impact. As the track subsides, the vocals and arrangements sustain a visceral implementation.

Even as the EP pushes ambition, it’s also not afraid to present a dominant pop side. Vocalist Naomi Raine makes that clear on the final track, “Good,” armed with a tonality that’s angelic, yet firm. Further on, she stretches the extent of the primary arrangement while equally drawing listener attention so as not to distract them. While the clean guitar and vocal aspect is constant, the percussion shifts in a notable but gradual manner, adding nuance to its presentation that is significant on a path toward self-improvement and spiritual health.

Overall, He Always Provides is a benchmark of modern gospel music. Its implementation and presentation are not only competently progressive, but seek to attract listeners from all over, regardless of genre preference or creed. Noting the musical talent as well as the accessibility of this EP, it’s fair to say that I’ve heard a worship-based release of exceptional, distinctive quality.

I come from a family who is passionate about all things music. I learned to sing at an early age, and by 13, had my very own Fender Strat guitar. I tried my hardest at learning all that I could. Because I was born with cerebral palsy, I had to teach myself an adaptive playing style. I learned to write and record my own music, despite these difficulties. In college, I started making great use of my writing abilities by reviewing music, as well as copy editing. I guess it's best to stick with what you know, while welcoming a fair challenge at the same time.
Previous New Cuts On The Way From Ronald Mkiza
Next Underground sets the Bar with $TYLJA on “I Remember” feat. N2ition + That Boy Cayse