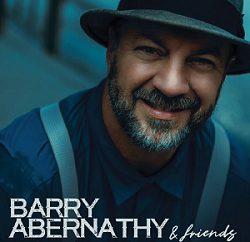 Vocal harmonies born of the dirt from which the stories they convey were first sourced. A rhythm that synchronizes with your heart even at a distance. The sense of community and cultural continuity that persists from one century to the next. Poetic binds that tie in both melody and linguistics the same. Quite true, it can be said, that bluegrass is one of the most American styles of music you can get your hands on, but rarely is it found in the pristine condition Barry Abernathy of Mountain Heart and Appalachian Road Show fame and his collaborators present in the new album Barry Abernathy & Friends. Across eleven songs, which feature everyone from Vince Gill to Doyle Lawson and Steve Gulley to Rhonda Vincent, Abernathy produces a haunting atmosphere based on a masterclass of bluegrass fundamentals required to make “Lost John,” “You’ll Never Again Be Mine” and “Birmingham Jail” into unforgettable submissions. The rulebook hasn’t been thrown out the window for these performances, but instead revisited as the holy text it deserves to be treated as; for in Barry Abernathy & Friends, the line that separates the players from their craft becomes increasingly blurry as we press forward in the tracklist.

“Fall on the Rock (featuring Shawn Lane)” and “Unwanted Love (featuring Dan Tyminski)” are two of the best harmony-centric numbers on this record, but they’re hardly the only material of the sort. Abernathy, usually known as more of a sideman than this record allows for him to be, tends to structure everything in his new LP off of the chemistry he has with the other artists; Vince Gill brings melodic consistency to “Birmingham Jail” and “Short Life of Trouble” while Steve Gulley tosses a bit of vocal color into the mix for “One Leg At a Time,” “Back in ’29,” “Midnight & Lonesome” and “Lost John.”

There’s a wonderful simplicity even to the more emotionally overstated tunes here, and in tracks like “They Tell Me (featuring Doyle Lawson and Josh Swift),” it’s as much a focal point as any of the other constructional cosmetics would be. You can’t go wrong when compositional space is being utilized with as great a degree of efficiency as we find in Barry Abernathy & Friends, and one could even make a case for this being a good standard-setter not only for Abernathy but the numerous musicians he’s likely to inspire with this piece.

For bluegrass aficionados young and old, far and wide alike, I do believe that Barry Abernathy & Friends is going to be one of the tougher studio albums to beat this year in terms of style and artistic integrity. While there’s a lot of glitz and glamour behind plenty of the guest players in this record, it’s the man of the hour who seems to walk away looking like the most adept of the bunch, largely thanks to the manner in which he brings the aesthetical framework together in songs like “You’ll Never Again Be Mine” and “Unwanted Love.” The album was made to preserve a copy of his singing voice on record in the event he lost it to a surgery he successfully came out of unscathed, and it feels every bit the landmark piece such an offering should be. It’s brilliant and exactly what I look for when I’m browsing new bluegrass, but moreover I think it shows that Barry Abernathy’s star often shines the brightest in the company of talent as special as his is.