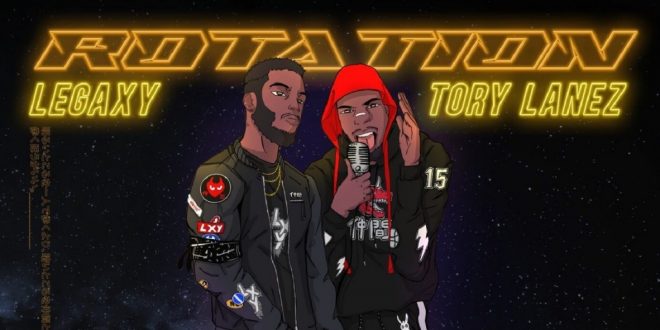 Streamlined beats are almost everywhere you look and listen right now, but in the realm of vocal-powered grooves Legaxy and Tory Lanez are bringing the heat like no one else can in their new single “Rotation.” With Legaxy taking the lead and Tory Lanez backing him up in one of the more credible collaborative moments of the year so far, “Rotation” shapes its narrative on the back of a slow jam beat undisputedly tethered to G-funk and retro R&B more than it is anything else in the modern pop lexicon. The vibes are classic while the rhymes are tight as a rubber band, leading to incredible sparks from the track’s beginning to end.

The harmonies here are surprisingly the most potent element to behold outside of the climax in the hook itself, and I like that neither Legaxy nor Tory Lanez have a problem spreading out a melody as opposed to isolating it (thus generating more spotlight for themselves in the process). This is actually a really selfless collaboration from a compositional perspective, and given the flexibility they allow within the groove, I can imagine this being even sexier when played for a live audience hungry to get back out on the dancefloor.

As far as the feature is concerned, Tory Lanez straight kills it in “Rotation,” mostly on the strength of his multidimensionality as a vocalist. We already knew the flow was going to be the pinnacle, but the contrast it starts up with Legaxy’s style is an outright fire-starter in the middle of dense sonic brush. Both of them introduce fine points to the narrative rather angularly, alluding to a smoldering tension that only gets a half-release by the time we reach the conclusion of the song. These two have enough in them to get back into the studio together again sometime, and I’m certain other listeners will notice this as well.

There’s definitely some duality to the swaggering lyricism in this track, speaking not just to retrospections on success but the remarkably surreal acknowledgement that we’re still climbing one mountain or another. It’s almost like Legaxy wants to frame his present through the lens of looking back somewhere in the future; i.e. manifesting your own destiny through visualizing where you want to be. An ideal end to any story is having the ability to remember the ascent you had to make in getting from the bottom to the top, and I think that’s largely the concept here more than any degree of cosmetic showboating would compensate for.

The 2020’s are slowly but surely starting to feel more and more like hip-hop’s next critical era, and I would encourage you to not take my word for it and instead explore jams like “Rotation” for yourself this month. Legaxy unleashes a beast of a collaboration with Tory Lanez here, and whether you’re keen on the hardcore rap underground in the United States right now or not, these are definitely the sort of grooves you want to be listening to this year.