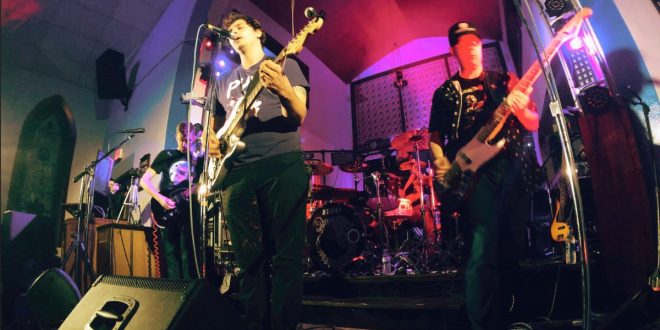 Northern Ohio Alternative Rock trio The Casket Company have released a 7 track live album, aptly titled, “The Casket Company Live”. The album was recorded at a live show at HALO Live in Sandusky, Ohio, back in April of 2019. “In December of 2020, I spent half of the month fighting strep throat, then was hit immediately with COVID19 that lasted into 2021,” explains vocalist and bassist Shawn Daley, “I own HALO Live at The Mohawk Studio where the album was recorded. We’ve played here like 3 times in support of various tours, finally getting a recording of the one set we did after releasing our album “Full Circle” in Jan of 2019. In December amidst all my mental & physical chaos I found this recording and decided that this was the distraction I needed. Listening to this live show in the studio brought me to tears, a moment captured that felt like it was eons ago.”

When it came time to pick a single, The Casket Company chose fan favorite “Or, Life In The Woods” from their 2015 album “Fever”, which was re-released in 2020. “ “Or, Life in the Woods” stood out as the track that gets the most requests at shows, but also embodies the journey into the mind of someone kept in isolation, who understands they aren’t like the “normal people”. I now find myself relating to this track even more now, and listening to this album doesn’t replace the therapy that live performance bring to so many… at least I now have a soundtrack help keep hope for live performances to return.”

Hailing from the Great Black Swamp of Northwest Ohio, The Casket Company is a powerhouse trio that will push your boundaries and not let up. Heavily influenced by grunge and prog, the music is a hard-hitting vessel for the lyrical assault that comes after.

Their songs run the gamut emotionally; taking your mood on a roller coaster with a raw, almost shameless delivery. With Bruce Vermett’s impeccably dynamic drums, Shawn Daley’s heavy and grinding bass, and Alex Baird’s howling, breathing guitar; their live show and albums alike are a testament to life and loss in the Rust Belt.