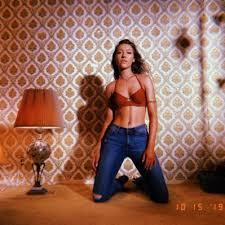 Eroticized by the harmony but completely alluring all by itself, Jaimie Steck’s lead vocal doesn’t need a lot of help to carry an entire composition, and in her new single “Boomerang,” it doesn’t just that and more. Heartily synthesized but surprisingly lacking in the thin, tininess of most dance-centric pop music to debut in 2021 so far, “Boomerang” grabs its audience by the collar and gets a response pretty instantly, but not by sheer force alone. Steck knows how to finesse the narrative, and she uses every trick she has in the book to make this her most pointed statement of self yet.

Although it’s often the opposite, this is an instance in which the buildup to the chorus is actually a little more cathartic than the release from the hook. When she does get into the chorus, Steck descends with the harmony as opposed to spiking it as high as she can go, adding a layer of menacing mystique to the mix that wouldn’t have been here in any other scenario. Everything before and after sooths the burn of this moment, which is both the climax of the song’s first act and the catalyst for the groove continuing on into the next.

In Jaimie Steck I see a young pop singer and songwriter who knows exactly what she’s doing and how she wants to get it done, and I would have to say that her new single and music video “Boomerang” is unquestionable verification that she belongs right where she’s at. It’s easy to understand why her momentum has been growing exponentially in the last two years when listening to this song, and if she can keep going with this present style I don’t see any reason why she won’t break out of the Miami underground and onto the primetime in the near future.

Previous Mikewdennis Unleashes His “8th Deadly Sin” Video And Single
Next Single Review: Robyn McCorquodale “We Fly Together or We Don’t Fly at All”