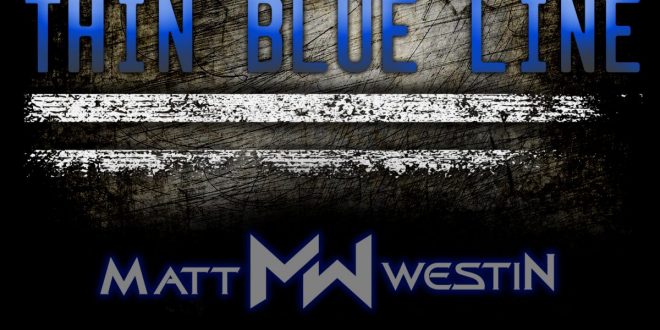 It takes real passion for someone with a flourishing career as an engineer to quit and leave behind the promise of a secure future for an uncharted musical journey to fulfill and satisfy their soul. This is exactly what the prolific country musician and actor Matt Westin did after the death of his father to whom he dedicated his debut album, Legacy.

In his own words, he “was lost and depressed and very angry” after his dad’s death but “Music ended up becoming a big part of my healing process.” Having released charting songs that have enjoyed international airplay as well as earned him recognition in Country music circles, Westin, who says he got into the music industry for “deeply personal reasons,” has released his new single, Thin Blue Line (Out on February 26th.)

The “Thin Blue Line” is essentially a symbol that stands for the noble ideals of justice, freedom, bravery and solidarity which bind police officers to the diligent and unconditional service for their country and their fellow citizens. With this song therefore, Matt Westin honours and celebrates officers who have given themselves to service and even paid the ultimate sacrifice for it.

In the chorus, Westin in his deep, rich voice sings “a salute to the fallen heroes for the honour they have earned” in apparent homage to those who lost their lives in the line of duty while pledging solidarity with the forces by “We are we are, the thin blue line.” In the verses, Westin belts out bold patriotic affirmations such as “It’s more than just a job to us, it’s really who we are” and “Everyday we find a reason another reason why we laid our lives on the thin blue line”.

With lyrics like “Keeping our neighbours safe or finding that missing kid” Matt Westin outlines some of the roles the police forces play in the country. He addresses the uncertainty and danger that comes with being in the service in lyrics such as “that goodbye kiss might really mean goodbye” and “We expect the unexpected” but asserts that “all across America, the reward is worth the risk.”

A song rich in subject matter and social relevance, Thin Blue Line shows just how much of a good songwriter Matt Westin is. Backed by the upbeat, high energy instrumental in the background, this song is the perfect anthem with which to reignite the flames of patriotism and to bring the people together to achieve a common national cause of growth and prosperity.