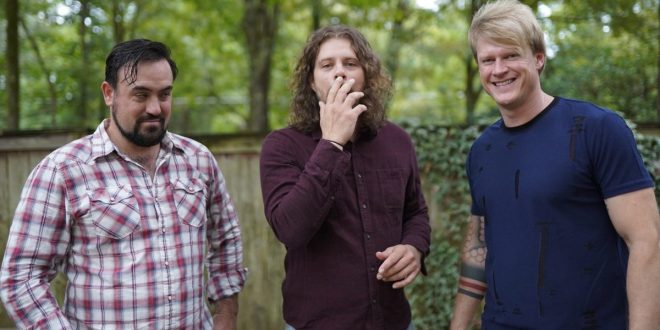 Album Review: Middle of Maddness – In the Crazy

Tennessee trio Middle of Maddness came together as a result of frontman/bassist Zak Gardiner initially familiarizing himself with the layout of a friend’s studio, which ignited his passion for writing and producing music. While working for drummer Eli Jones on his farm in Memphis to pay for college, the two would collaborate during breaks. Meanwhile, guitarist Joe Watson was brought into the fold through Jones’s sister-in-law, and the three friends would soon turn their casual jam sessions into serious songwriting efforts. The resulting culmination created their debut album, In the Crazy, a reflection of their formation during the start of the Covid-19 pandemic.

The opening track, “Real American,” is a telling statement, not only in its heavy rock guitars and matching vocal intensity, but in centering on the uncertainty and subsequent paranoia that is revealed as a result of these current, ongoing circumstances. One aspect I found interesting about the song’s execution was how Gardiner’s raw intro scream contrasted with his otherwise pitch-corrected verses, despite his clear competence when it comes to range. Even so, all three members are locked in with one another and bring the album off to a solid start. There’s a nice transition between the track to follow, “Running,” and the titular third track, in which both exhibit hooky intro riffs complemented by a danceable groove and sensible sentiments. Of the first side’s tracks, “Bad Desire” stands out for its shifting from southern rock-inspired arrangements to those of an underground/indie rock variety. At the same time, the song seems to expand on the intensity of the previous track, “Flow Down,” covering another scenario of the impact of pain that stems from vulnerability in a desperate situation.

Starting on the latter half of the album, the paranoia angle is carried over to the next two tracks, “Someone’s Watching” and “Only Love.” The imagery of the album’s cover art is especially understood, as both style and theme directly play into it. For all of the album’s dark vignettes that bolster a, the track “Sugar Stepdaddy” demonstrates that the band aren’t afraid of giving it a sense of twisted comic relief. After a cry of crunchy hard rock in the penultimate “Own Two Eyes”, the band punctuates the album’s closure with a track of subtle nuance when it comes to implementation. It’s refreshing to hear the beginning verse’s foundation clean and melodic, while subsequent arrangements showcase a response of only gradual overdrive, and sit comfortably alongside the passion of Gardiner’s and Jones’s harmonies.

Overall, I was pleasantly surprised by the content of In the Crazy. I originally thought this was going simply be, like many current bands of the Deep South, an engaging throwback to 70s southern rock roots. However, on top of having a seasoned understanding of their instruments, the band brings a layered, diverse variety of tones, a call for unity, and finding humor even in the bleakest of times, which makes their presentation pretty well-rounded. With nearly a dent through the second month, I look forward to how this combination of aspects will fare in future material.

I come from a family who is passionate about all things music. I learned to sing at an early age, and by 13, had my very own Fender Strat guitar. I tried my hardest at learning all that I could. Because I was born with cerebral palsy, I had to teach myself an adaptive playing style. I learned to write and record my own music, despite these difficulties. In college, I started making great use of my writing abilities by reviewing music, as well as copy editing. I guess it's best to stick with what you know, while welcoming a fair challenge at the same time.
Previous Americana Artist John McDonough Will Release All Acoustic Album “Second Chances”
Next Single Review: Tarah Who? – “Swallow That Pill”