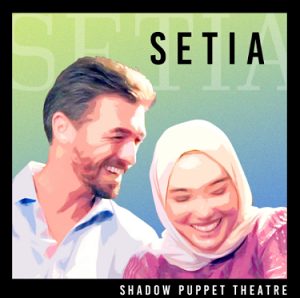 “Devotion ‘tis what defines in this tale of us…” croons a voice from behind a hesitant string melody in Shadow Puppet Theatre’s “SETIA,” the words coming to us in Malay but the emotion translating into the universal language of music. There are no synthy grooves caving in on us, nor are there any bloated basslines or monstrous guitar solos to intensify the heat generated in this initial harmony. Shadow Puppet Theatre don’t need that kind of ornamentation to make a point here – they’ve got unrelenting tonal brilliance on their side, which is all any act really needs to generate a solid single.

As much as the vocal gets the energy pumping at the start of this song, it’s the swagger of the distant acoustic guitar part that really seals the deal for me in the hook. “SETIA” is frustratingly simple if you’re a music nerd for a couple of reasons, the biggest among them being that its cosmetics feel so decadent at first glance. This is a singer that puts a humble but nonetheless heavenly embellishment on what would already be a rather jazzy take on indie pop, and compared to a lot of the other tracks I’ve been listening to recently, the finished product just sounds more easygoing and free of unnecessary pressure.

I might not have been listening to Shadow Puppet Theatre just a week ago, but with the rhythm and rhyme of this latest release under their belts now burned into my mind, I don’t see myself skipping any of their future output for anything. Not afraid to push the envelope lyrically and musically, this act has a lot of untapped potential waiting to blossom in the light of a western audience’s attention, which is exactly what I think they’re going to win on the strength of “SETIA” and its marvelous melodies.