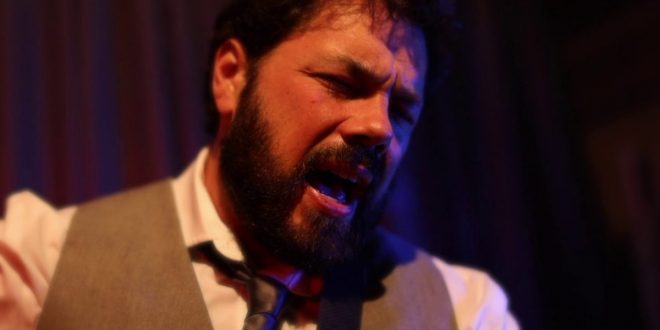 David Brown is a singer/songwriter, born in Ft. Bragg, NC, and currently living in the Bay Area. Inspired by the John Lennon hit “Working Class Hero,” Brown catalyzed his creative pursuits, buying his first guitar at age 17 upon graduating high school. In 2008, he moved to Colorado Springs and would eventually enlist in the military the next year. Beginning his training along the west coast, Brown recorded his first full-length album, Barefoot Remedies, with his influence scope based around early blues. Following his honorable discharge after a decade of service, Brown freely pursues music full time. His latest release is an EP titled Wayward Blues & Co., which continues to capture the spirit of the blues as a foundation for his thematic focus.

Opening on “Devil Inside of Me,” Brown engages with a straightforwardly expressed bout of internal struggle, complemented by a stripped-down performance of only acoustic guitar and vocals. His tonality gradually builds to a roaring fire that sustains a melodic sensibility, as well as set the dominant mood for the song’s remainder. The next track, “Leah,” finds Brown expanding his creativity by way of a full band accompaniment. By the same token, the song’s main sequence showcases a careful and substantial instrumental build prior to Brown’s singing. Once his vocals enter the mix, they emit a nice bite in both their stationary and projected forms, as well as blend comfortably within the extent of the involvement. I appreciate how the nuances of his tone play into the thematic angle, centering on being trapped within a woman’s seduction – everything sweet and gentle, yet sultry and cunning all the same.

At the midpoint is “Whiskey Bottle Blues,” where Brown is full-on immersed in the classic sound, channeling the grit of Big Joe Williams and the ferocity of Screaming Jay Hawkins. His wails of despair are of clear contrast to the responding leads that come off otherwise smooth and collected. The presentation honestly took me aback with how naturally soulful it was, reaching not only a zone full of yells, but full-fledged screams. Alongside the theme, the two elements seem to represent the intoxication of whiskey and the deep, lingering sense of inevitable post-breakup disenchantment. Ultimately, the penultimate and final tracks, “These Four Walls” and “I’m Comin’ Home,” represent two separate dream-based perspectives that round out the EP. While one is about a nightmare in its rawest form, insinuating an overbearing takeover of demons amid the sensation of constriction, the other serves as a placeholder in marking off the turmoil of a difficult journey, wherein Brown abandons self-doubt, and, in the end, regains hope.

Overall, Wayward Blues & Co. proves a solid collection of material that signifies Brown’s return to a band setting. The buildup toward that involvement was very-well utilized, as the EP unearths the chapter of a journey that begins tense, uncertain, and stone-cold, but ends colorful, warm, and humble. I look forward to how Brown further expresses himself in an expanded output for 2021.

I come from a family who is passionate about all things music. I learned to sing at an early age, and by 13, had my very own Fender Strat guitar. I tried my hardest at learning all that I could. Because I was born with cerebral palsy, I had to teach myself an adaptive playing style. I learned to write and record my own music, despite these difficulties. In college, I started making great use of my writing abilities by reviewing music, as well as copy editing. I guess it's best to stick with what you know, while welcoming a fair challenge at the same time.
Previous IAN ABEL BAND Releases New Single, “Not Afraid to Die”!
Next EUGENE, OR’S BLUPHORIA SIGN WITH EDGEOUT RECORDS