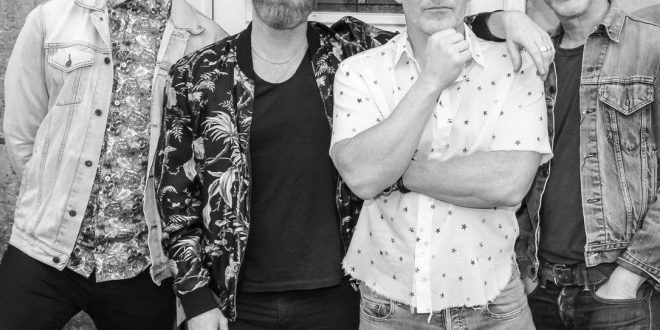 Their new song “Nothing In The World Feels Better” was mixed by Grammy nominated engineer Mark Needham [The Killers, Imagine Dragons] on the track a propulsive beat glides underneath warm guitars before a hypnotic chant takes hold with a straightforward, yet poignant message. “This moment could be as good as any moment you’re ever going to get, and it could be the last,” Katz explains. “So, nothing in the world is better than that.”

Whole Damn Mess represents the union of lifelong musicians and friends with a mind-blowing collective pedigree. Don Miggs founded and led MIGGS to international popularity (in addition to collaborating with everyone from Billy Corgan to Mick Fleetwood. Katz has been the long-time guitar player for The Mighty Mighty BossTones, while Nielsen and Hansen have found success in their side project Floyd Wonder. “Everybody has an individual skillset, yet all of those cross over,” says Katz. “We’re not four carbon copies by any stretch of the imagination. We all bring something to the table and push and inspire each other. That’s what makes Whole Damn Mess work.”

In 2018, they dropped their full-length debut The Queen and the Outcast followed by the Princes Turn to Thieves EP a year later. Relying on the perspectives of four singers, four musicians, and four producers, they reached the nexus of their respective talents through sessions in Los Angeles and Tampa, FL throughout 2020.

“It’s like we’re making records for the teenage versions of ourselves. It goes back to the moment you saw your first concert, heard your first live band fire up, and looked up at the lights and said, ‘Holy fucking shit, I need to do this for the rest of my life’. It’s something every musician has felt. That’s the feeling we want to share.” – Whole Damn Mess

As crazy as the world may be, the moment feels totally right for Whole Damn Mess and their undeniable energy. “We’ve never lived in a better time, and it’s never been more chaotic,” says Miggs. “We are a respite from the challenges of being upright and a deep look at the everyday struggles, yet still standing up and saying, ‘Let’s do this’.”

Stephen Vicino is the founder of MusicExistence.com. He created this site to give talented musicians a voice and a way to be discovered.
@@svicino
Previous Nathanael Philip Mosher Reveals Touching New Single “I Don’t Wanna Die Young”
Next John Vento Releases New Track From “Brick By Brick” Collection