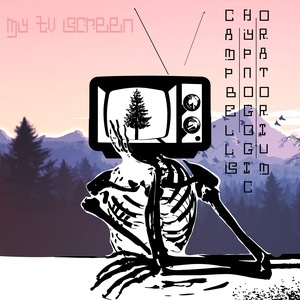 When I first heard “TV Screen” from musician Campbell Waldron, one of my first thoughts was “oh, this sounds like that one song, you know the one. Uh..what’s it called again?” I scoured the internet far and wide to try and find the song I thought I had in my head, only to discover at most, maybe aesthetically it resembled your mid to late 90’s grunge affair from the likes of Nirvana and Smashing Pumpkins, but found myself shocked at the realization that in truth it didn’t sound like a song that exists, but instead Waldron has crafted a song that feels like it’s existed for years that many have opened since.

While this may come across as me saying that what Waldron has done is create some kind of immortal masterpiece, I wouldn’t go that far, but the track is incredibly potent and expertly produced enough to lend itself to my previous thoughts about it having existed for some time now. Starting with an unassuming electric guitar riff, Waldron talks about feelings that are wildly relevant ranging from his hatred to those taking life for granted and mutilating its beauty to what almost comes across as atonement when condemning drug dealers which I no doubt assume it comes from his time as a former drug dealer. The song aches from the feeling of someone who’s led a full life and has seen too many things that it’d be farcical for him to not feel this kind of way.

Clocking in at about three and a half minutes, the song moves along briskly and what it lacks in a bombastic sense of escalation instrumentally, it more than makes up for it with sheer performance power and some evocative imagery stemming form Waldron’s vulnerable lyrics. Waldron has the charm of an everyman and his disappointment never comes across as petulant, more-so apathetic, like nothing can surprise him anymore in a world of crushing disappointments. Sometimes I wish the lyrics would come across as more cutting since you can sometimes feel the rage within him brimming just begging to come out, and I’d love to see this more aggressive side come out in future releases.

The mixing on the song can leave a little to be desired as it can feel a little uneven, especially when you head into the chorus and the electric guitar and bass can drown out the vocals, but it’s a small complaint otherwise. Waldron, who now resides in Norway where he records in his home. This comes after many years of performing after developing a passion for music when he was 12. He describes the growth he’s experienced as both a player and a person as filled with ups and downs, ranging from personal injuries that kept him from playing, his dissatisfaction from his instructors and peers, and feeling like a general outcast before leaving the states for Europe.

It’s hard based on this song to tell if he’s achieved a sense of internal peace considering how damning the song comes across, but with the lyrics “I’m not afraid anymore,” one can hope but this is an exciting new chapter for the rising talent.