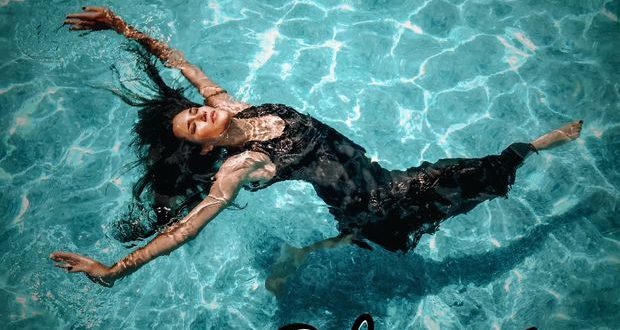 There’s nothing particularly subtle about the thrust of the instruments that get “Blazing Stars” started, and yet the delicate nature of the harmony soon to unfold in this prime cut from Caterina J’s Reborn is unmistakable. At once, this singer/songwriter is able to fuse the best parts of a vulnerable vocal-led composition and that of a confident pop slow jam inside of a singular tune – and, as fantastic an accomplishment as this is, it isn’t the only such example of melodic eminence I could point to in Reborn.

This extended play doesn’t hold back from us in tracks like “Blazing Stars” or its opening song “Rollercoaster;” instead, this is a record that has a way of thrusting us into the arms of its creator through less than stealthy means whenever possible. There is no credible way of diminishing the effects of either side within the duality that comprises Caterina J’s style of play; there is only experiencing her work as it unfolds in this five-piece tracklist and the stunning music video made for its star single. My overall opinion? It all adds up for a can’t-miss affair if you’re a music buff.

“Brave” is probably the most balladic song here, but it doesn’t weight the latter half of the record down with a lot of self-centeredness by any measure. On the contrary, this sliver of completely unguarded poetic lust is perhaps the greatest way Caterina J could have closed out her performance in this EP. It follows a darkly melodic pop-rocker in the title track that pushes and shoves its way into the spotlight unapologetically, and even though “Brave” might not have the structured attack that “Rollercoaster” does, both songs are equally potent from a sonic perspective. The video for “Sin Igual” alone absolutely made me want to explore the rest of the record right from the moment I first saw it forward, but its black and white charisma doesn’t necessarily reflect the complexities that Reborn is truly made of. There’s so much to unpack in this tracklist, and still so much to understand about the artistry of Caterina J, that I almost feel as though this extended play was made with the goal of merely teasing her skillset rather than giving us the whole nine yards.

From the new wave-esque harmonies of “Sin Igual” to the fleeting sense of youth that accompanies the verses of its namesake song, Reborn is the perfect record to get your January in full-swing. While I didn’t know a whole lot about Caterina J before I got into her music just recently, there’s no getting around the enormity of her talent after taking in a group of compositions as stirring as this one is. Reborn has the look and feel of a miniature LP, and whether it takes Caterina J a short or long amount of time to get back into the recording studio, you can bet everything on my paying close attention to what her sound evolves into over the next few years.

Previous Single Review: See Your Shadow “I Know My Worth”
Next Country Chart-Topper Will Donate Proceeds Of New Single To RAINN