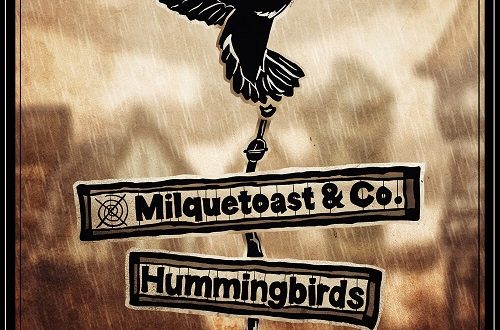 While animated and presented in sepia as if to suggest an ancient quality not made clear to us in the song itself, the video for Milquetoast & Co.’s new single “Hummingbirds” is an imagistic treat that doesn’t deliver its eccentricities to us in limited doses. We’re brought into what feels like a dreamscape or tremendous unrest only to find ourselves as trapped within the suffocating surroundings as the protagonist himself is. The walls are closing in and memories are our only compass outside of the melodic sounds rising with the tide in the backdrop. Milquetoast & Co. are officially at it again this winter, and if you expected less than their A-game in 2020, you’re in for one incredibly rude awakening.

A faint violin element in the mix is simply heartache defined in aural terms, and though it’s not given much of the spotlight it still manages to have an impact on the way I read the lyrics here every time I listen to “Hummingbirds.” There’s no overstating just how brooding this facet of the harmony feels, especially after the sixty-second mark in the running time, and it’s usually intricacies like this one that end up producing some of the most passionate moments in any track this act records.

The vocal is isolated from everything else, implying loneliness and a distance between artist and audience that only makes the role played by the aforementioned violin all the more noticeable as we press forward. 2020 has definitely left a lot of us feeling all alone as quarantines have become a part of the cultures we live in around the globe, but I don’t think this narrative is based on the COVID crisis at all. There’s too much intimacy in the vocal and, more importantly, too potent a vulnerability in the lyrics for this to be the case in my opinion.

“Hummingbirds” is multilayered and unquestionably multi-interpretive, but no matter what you take away from its music, lyrics, video or creators, I would deem it required listening for audiophiles everywhere this December. Milquetoast & Co. have fought their way through the underground to reach the pinnacle of important Denver-based alternative acts making a name for themselves in the 2020s, and while they’re veterans of the game by all accounts, this is a group that doesn’t seem to be losing any of the steam that got them started across the country over a decade ago.