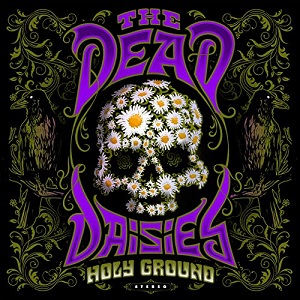 Getting started with The Dead Daisies’ “Holy Ground (Shake the Memory)” isn’t that much different than playing any of the other single/video combos they’ve released since first getting together just a little while ago; the biggest difference, I suppose, is how quickly things evolve into brilliant bedlam for the players and the incendiary groove they undertake. The Dead Daisies sound like a band pushed over the edge and into the depths of their own compositional consciousness here, and for a rock fan like myself, theirs is probably one of the only direct links to the classics that feels as relevant to the modern narrative as it does a bygone chapter in rock’s storied past.

The chorus here is actually one of the poppiest this group has inserted in one of their original tracks, but it isn’t lacking in beefiness where it counts the most. It is, after all, sandwiched together by a killer guitar solo and sensuous lead vocals from Glenn Hughes that could be described as some of his most streamlined since joining forces with this outfit. We’re both overwhelmed and obliged to step closer to the hook at the same time in this performance, which despite seemingly like a bit of a contradiction makes for a really exciting climax in “Holy Ground (Shake the Memory)” I doubt I’ll soon forget.

“Holy Ground (Shake the Memory)” isn’t going to shake up the world of rock n’ roll as we know it this December, but it’s absolutely going to breathe some much-needed life back into the genre’s underground and mainstream the same. An unapologetically difficult 2020 might have hurt the tour circuit, but it would appear that The Dead Daisies have been doing just fine in development of their new material this whole time. I’m impressed with what they’ve got so far, and with any luck they won’t stop sharing the good stuff as we enter the next year.