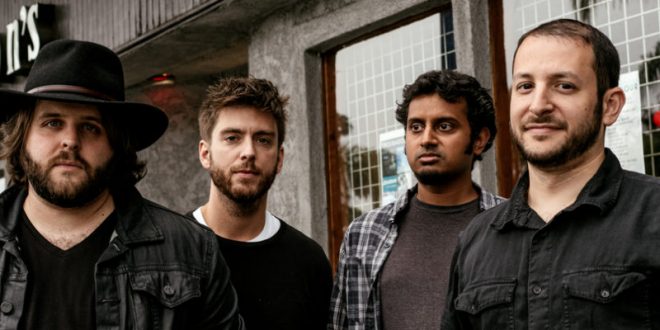 Ian Abel is an emerging singer-songwriter. Originally from Louisville, Kentucky, Abel eventually relocated to Los Angeles, California in early 2017, forming the Ian Abel Band alongside guitarist and high school friend Westray Tackett, and New York-based drummer Kenny Schwartz. Their debut album was recorded in 2018, and is being released through a gradual output of singles. Following the success of the band’s third single, “Outlaws,” they would add bassist Karthik Suresh to the lineup, rounding it out as a quartet. Currently, the band released the video for their recent single, “All for Love,” filmed by Mitch Parks at the Troubadour on May 31st, 2019.

I caught up with Ian to discuss his regular job, the essence of both friendship and music licensing, the creation of the new video, as well as what he has assessed from their three years together.

You work a regular job in addition to managing your music career. How has that been?

Well, before the pandemic, I was giving a lot of guitar lessons, but when Covid hit, they started dwindling down. Right now, I work in a metal factory, and it’s been alright. Having to get up early keeps me on a good schedule, and I’ve actually worked there since I was 14. I’m back in Kentucky right now, and it’s cool to see people that I grew up with who are older machine shop guys. I’ve written a bunch of songs about being there, because it has given me time to reflect on where I’ve been and where I’m going.

I noticed that Westray is your friend from high school. Have you always maintained a good relationship since those early days, or did it become stronger once you were getting this band together?

Westray and I were cool in high school, but we got closer as adults while playing music in Los Angeles. He’s lightyears ahead of me when it comes to playing music in general. I picked up the guitar at 15, and he did when he was eight. Respectfully, I had no business making music with him while we were in high school at all (laughs), but we were cool. We would jam sometimes after school, and he’s always been an awesome dude. Our friendship is definitely stronger than ever.

For your debut album, you worked with Jon Graber, who you are also very good friends with. What do you notice about the characteristics he brings to the album?

So, Jon was high school buddies with our drummer, Kenny Schwartz, who has also become one of my best friends. We had an album in the works, but Kenny said it wasn’t ready, and told me flat out that we shouldn’t release it just yet. We worked the songs up, and then we brought them to Jon. Jon is awesome because one, he’s hilarious, and two, he’s incredible at what he does. He makes everything sound good, you know what I’m saying (laughs)? He’ll also criticize us, but in a nice way. Sometimes, we’ll play something, and he’ll say, “Nah, dawg, this ain’t it, let’s try something else.” He’s also not afraid to explore, and he’s the type of dude that, no matter what project he’s working on, you’re getting all of Jon Graber, which is a lot of goodness.

Last year, you released one of the singles for the album, “Shoes,” and licensed it to All Elite Wrestling. Usually, when it comes to bands licensing their music, they may be unfairly labeled as sellouts, but nowadays, that notion seems to have evolved. What are your thoughts on music licensing in general?

Honestly, I wish we could ‘sell out’ and have the songs on everything (laughs). If it was possible, then that would be extremely worth it. But if anyone thinks of selling out in a negative way, they honestly don’t know what they’re talking about. Music works well together with art, TV and movies, and is the best part of the combination. Being part of the All Elite Wrestling Inaugural Pay Per View event – the match between Cody and Dustin Rhodes, who are the sons of the famous Dusty Rhodes – is such a historic moment for the wrestling community. I’m a big wrestling fan, since I’m from Kentucky, although I’m a little bit on the outside looking in. I’ve been to several Wrestlemanias, but people will talk circles around me if I’m in the wrong group (laughs). To see their reaction to something I enjoy myself, though, is remarkable, and I wouldn’t change that for anything.

You have a new video out now for your single, “All for Love.” How did that come about?

Originally, we were going to release that group of singles as part of an album, but these days, as an emerging band, it’s not good to just drop an album in one go. I have these friends who are in great bands, who tried releasing like 15 songs at once as they were building their audience, and that didn’t make sense to us. So, we had all these ideas for videos right before the pandemic started. Luckily, one day, Kenny put click tracks in our ears to use at our live shows, and that way, they can match the tempo of what we’re playing. We ended up doing that for one of our shows at the Troubadour, and I was really able to get a lot of use out of it; it matches up beautifully.

What do you notice about the production of your recent singles? Do you think it came together really well?

Yeah! All the pre-production was done by myself and Kenny in our studio, but the mixing was done by Jon. We got it mastered by Alan Douches at West West Side Music, and the overall production of them is top-notch; it’s radio-ready. Everything we recorded at United Recording sounds so good, and the performances are all great. I can’t take credit for any of the actual production work, but as a songwriter, I’m glad to have this team of people come together with ideas for this music and help me create it.

Speaking of your team, how has your chemistry been with one another in the band, especially these days?

You’ll hear about legendary bands sometimes getting into fistfights, and that’s not the case with us. We’ll have our disagreements from time to time, but we’re all really good friends. We get together once a week to rehearse like professional bands do, and it’s just always a good time – nothing but laughs. Everyone’s just open and wants to create cool music. Our chemistry is great, essentially.

Putting your music career into perspective, what have you learned about yourself, both as a musician, and as a person?

Oh, wow, that’s a good question! What I’ve learned to do is let go of the reins. I might hear something in my head and bring it to the band, but then Kenny might be like, “I don’t think this works,” or “Let’s adjust the tempo.” In the beginning, I was a lot more of a stickler, like, “This is what I hear in my head. We’ve got to push it this way.” But as I work with people who are better than me, and who are giving me time to create whatever idea I have, I realize that I need to sit back and shut up (laughs). I have to let the people who are incredible at what they do work at it, and just enjoy the fact that I’m part of the experience.

That’s really well put. Lastly, anything you’d like to say to your fans?

Yeah, and this is cool, since you’re the first to know! There’s this site called prowrestlingtees.com, which handles merchandise associated with wrestlers, announcers, referees, and anything else. They have a sister company called Below the Collar, which operates in the same building and everything, except you have to have an established following, and be affiliated with them somehow. But we just got an email that we’re opening a store with them! I’ll be getting together with a different Wes, Wes Henry, who’s my artist, and we’ll design merch and get it out immediately. If you follow @ianabelband, we have some really cool merch ideas and we’ll actually get to implement them!

I come from a family who is passionate about all things music. I learned to sing at an early age, and by 13, had my very own Fender Strat guitar. I tried my hardest at learning all that I could. Because I was born with cerebral palsy, I had to teach myself an adaptive playing style. I learned to write and record my own music, despite these difficulties. In college, I started making great use of my writing abilities by reviewing music, as well as copy editing. I guess it's best to stick with what you know, while welcoming a fair challenge at the same time.
Previous Album Review: Danny Artuso And Victor Nesrallah “Wearing the Blues”
Next Emotional New Single Coming From Atlanta Rapper SnapDibz