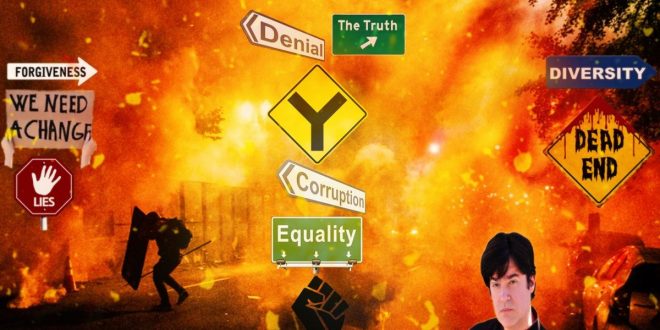 Riddled with textured but far too streamlined to allow for us to get caught up in its many details, “Culture War” wasn’t designed for the wallflowers or music snobs – it was written for the people, and Paul Maged is giving it to us in all of its uncut, ferocious glory this season. Released last month to a warm reception from his followers, Maged’s latest studio work and its companion video push the limits of rock into old school metal territory while leaving excess on the sidelines altogether, and for me, the effort amounts to one of the cooler tracks of the genre out this month.

“Culture War” has a political bend to its lyrics, but you’d have to be crazy to ignore its chest-beating melodic faceting as well. Everything here feels like a rebel yell smashed into a heavy-as-bricks rock n’ roll song, and considering how long it’s been since we had a serious band or soloist step up to the plate with this kind of an active approach to current affairs, I think a lot of listeners (and particularly millennial rock fans) are going to gravitate towards the sound and style of this release purely because of its composer’s daringness to be different.

I didn’t know a lot about Paul Maged before this release other than his respectable standing in the underground, but now that I’ve got a better idea about what he can do when there isn’t anything to get in his way as a professional, I’m going to be paying a lot closer attention to his output in the future. His is some of the last true blue rock you’re likely to get your hands on in 2020, and though it owes a lot to the past, its statements are grounded in a desire to live in a better future than the present we know now.