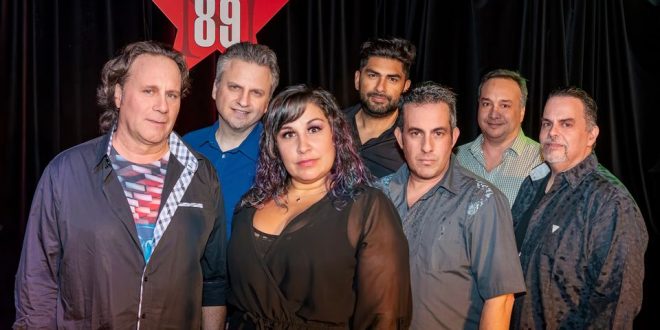 Live Vinyl is a rock, pop, live dance band from New York. Forming in 2017 as an initially exclusive live act, the band’s nuanced, yet accessible combination of rock and pop now defines fresh original recordings, with a thematic focus around hope for a Covid-free world. Their debut single is “Get Out Party Today,” which has achieved reasonable success since its release, and will be included on their upcoming EP, Living in the 2020s, slated for early 2021.

The single takes a laid-back approach with its samba foundation, and a 60s-inspired guitar chord sequence that complements its percussive involvement. For the live aesthetic established between each component, the arrangement comes together seamlessly. As the instrumentation sets in, the vocals play an equally focal part – a simultaneous nostalgic recalling of friends and family basking in idyllic unity, and a present call to action to keep pushing forward. This is a solid start to a concept fittingly on its time, and I’m looking forward to how it’s expanded not only on the new EP, but the band’s future releases.

I come from a family who is passionate about all things music. I learned to sing at an early age, and by 13, had my very own Fender Strat guitar. I tried my hardest at learning all that I could. Because I was born with cerebral palsy, I had to teach myself an adaptive playing style. I learned to write and record my own music, despite these difficulties. In college, I started making great use of my writing abilities by reviewing music, as well as copy editing. I guess it's best to stick with what you know, while welcoming a fair challenge at the same time.
Previous Single Review – Kamoken “Higher Love” (feat. Malou Beauvoir)
Next Juno Award Winner Korexion Signs With Canadian Label 3P