Home / Interview / Interview: Bern Mustian of Up from Here discusses new single, “Throw It All Away” 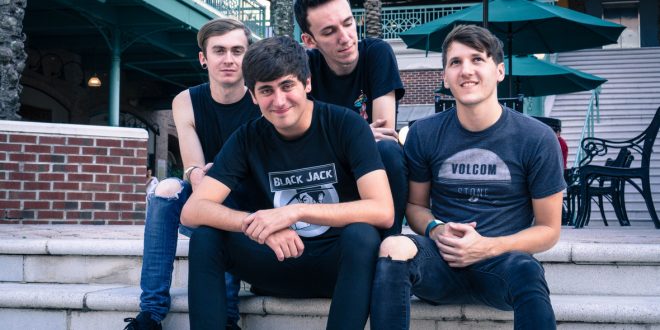 Up from Here is an emerging pop punk act based in Tampa, Florida. Following the release of their 2018 sophomore EP, Words Left Unsaid, their expansion to quartet form was topped by a similarly impactful boost to the band’s stature – two million combined streams across multiple platforms. Amidst the ongoing pandemic, the band sustained their output with several singles for 2020, including the year-wrapping “Throw It All Away,” which was also supplemented with a music video as of last week.

I caught up with bassist Bern Mustian, who joined the band in time for their expansion, to discuss his formative days, the sustainence of Tampa’s local music scene, the genesis of the band’s new single, as well as staying strong amidst the pandemic.

As I understand, the band was originally an acoustic duo in 2015, and had an EP, Better Ways to Escape. Can you tell me about your transition into the band?

Yeah, so, previously, the band was a duo made up of our singer, Danny, and this other guy, Will, who’s no longer in the band. They aimed to create high-energy pop punk songs with acoustic guitars. Eventually, they reached out on the Facebook group called Florida Pop Punk to try to turn the project into a full band, which is how I and our drummer, Alex, came in. Our current guitarist, Tyler, came in a year and a half after that, so now, our current lineup has been together for about four and a half years.

When you were growing up, which kinds of music shaped your musicianship?

Gosh (laughs), so many – everything from classic rock, to pop punk, to metal. The bands who I personally identify with, though, as far as my influences, are All Time Low, Fall Out Boy, Boys Like Girls, and more recent bands like Knuckle Puck and State Champs. We’ve been through so many musical changes already, but I think those bands align with what we’d tried to do.

Speaking of All Time Low, you collaborated with Rian Dawson on your second EP, Words Left Unsaid, which had given you a lot of success. What was it like working with him?

Oh man, it was a dream come true! All Time Low is my favorite band and has been for years. You know, I’ve seen every interview there ever was with Rian, so to actually be in the studio with him and talk about our music was really awesome. He did a great job of producing the record and it came out great!

In general, how did you get involved in Florida’s local music scene?

When we first started, we had a “play every show possible” mentality – everywhere from dive bars to basements. Every once in a while, we’d have the opportunity to play bigger venues, like The Orpheum in Ybor or the State Theatre in Saint Petersburg. We would either be the lightest band on the bill and play with only metal bands, or we’d be the heaviest while playing amongst all these indie pop bands. More recently, I think a pop punk scene has emerged that really didn’t exist when we started out, but it seems to be thriving even with the pandemic.

Do you notice a little bit more diversity nowadays?

Yeah, definitely! There’s a lot of different festivals in Tampa that have bands of multiple genres, from pop punk to deathcore, to ukulele/singer-songwriter-type musicians, and that’s really cool. I’m a fan of shows with metal or pop bands. No genre really bothers me; I can get into anything.

That’s cool! Currently, you have your new single out, “Throw It All Away.” How did that come about?

That song was part of a recording session we did in June in Hammonton, New Jersey, at a place called The Lumberyard, with Nik Bruzzese from the band Man Overboard and Ace Enders from The Early November. That was pretty cool, and the song is high-energy with great breakdowns and riffs, which is something we’ve actually strayed away from these last few years, but it felt good to release after we’d held onto it forever (laughs).

When it came to production for the song, how did you handle that aspect this time around?

In relation to the pandemic, how have you guys been as far as noticing these changes and making the best of them?

It’s been something else. Usually, we’re traveling far and wide and don’t record locally. The Lumberyard wouldn’t let us in if we flew on a plane, so we had to drive 15 hours from Florida to New Jersey. After we record, we’d normally go out and tour, but with the pandemic, it got a little “cabin fever-y.” It turned out well, though, and I think this has given us more time to give our music the kind of attention and dedication that it probably wouldn’t have otherwise. Some of these songs we haven’t played or practiced in months, but once we play shows again, we’d have to re-work a lot of them whenever we get to that point. Hopefully, that comes sooner than later.

When it comes to marketing your band these days, how has that been?

With live gigs not being possible for eight months now, we’ve had to do everything on the internet. Personally, I’ve always thrived at that, and it’s been a place where I’d sink a lot of my time into promoting the band. Maybe other bands in the scene have struggled at that more than I have, but for us, it hasn’t really been a problem. In the time I’d spend at home, I’d get impatient thinking about playing live, and wanting to meet fans and members of other bands. I want this pandemic to be over with, but at the same time, I’d want everyone to be safe.

As far as the chemistry between the four of you, do you feel like you’ve gotten a lot stronger?

Yeah, I think so. Very early on in the lockdown, we didn’t see each other in person for about two months, but I think that was like a much-needed break, especially after touring for all of last year. We’ve still been able to go into the studio and record music, and we’re going to put even more music out after this year, so I think we’ve gotten stronger for sure.

Since you’ve put out singles this year, do you see your output expanding into a full-length the next year, or would you continue with the same method?

I think in today’s musical landscape, especially when you’re an emerging band, the goal is to capture your fans’ interest with singles rather than a full album. However, with the material we’ve done since February, we’ll eventually do a full-length. Our current single is our fifth, and we’ll put out another one, hopefully in January. After that, we have studio time booked for next February, and when everything is completed, we’ll re-release the songs as a full-length on Spotify and everywhere else.

In your time together as a band, what have you learned?

You just have to keep persevering. I’ve seen many bands in the scene break up during this pandemic, and I get it. In the past, I’ve had so much time to dedicate solely to the band, but with venues being closed, we’ve had to take up different jobs to support ourselves. But these times have made us stronger, and even more willing to tour once things start happening again.

Hi, fans (laughs)! Thank you for taking the time to listen to us. I know this has been a crazy time, but I appreciate your support of us, and of rock music in general.

Up from Here Socials:

I come from a family who is passionate about all things music. I learned to sing at an early age, and by 13, had my very own Fender Strat guitar. I tried my hardest at learning all that I could. Because I was born with cerebral palsy, I had to teach myself an adaptive playing style. I learned to write and record my own music, despite these difficulties. In college, I started making great use of my writing abilities by reviewing music, as well as copy editing. I guess it's best to stick with what you know, while welcoming a fair challenge at the same time.
Previous Exclusive Interview: Ten Penny Gypsy
Next UK Electro-Industrial Band BIOMECHANIMAL Announces New Single,”End Your Life.”