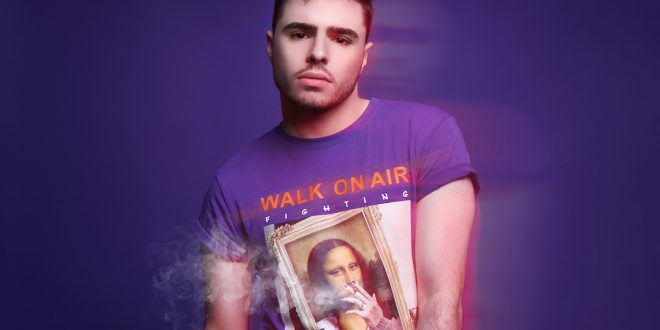 MkX has shown us his melodic skillset on plenty of occasions prior to his latest trip to the recording studio, but in the new single and music video “Fall,” he strips his sound clean for a hard-hitting rap performance unlike anything else presently in his discography. Addressing the camera straight-on in the video for “Fall,” MkX’s demeanor is sharp and profoundly cutting from the moment his vocal enters the fold forward, and while I came into this review with some high expectations based on my past encounters with his work, this is definitely a standard-raising release without question.

The beats here have a grinding feel that alludes to an industrial influence I hadn’t picked up on in this artist’s sound previously, but now that I look back at some of the content he’s been producing in the last two years, I think it’s something that’s always been present in his music. MkX is definitely a versatile performer, and based on the dexterous performance he’s putting on with the mic in his hands here, I don’t know how critics are going to proceed in branding his style of play; after all, something that blends as many rock, R&B, electronic and hip-hop influences as “Fall” does is definitely too stacked a single for the pop genre to encapsulate.

We get some edgy textures off of the bass parts throughout the whole of the song, but there’s never a moment in which the lower tones in the mix feel overpowering. That’s one of the biggest issues artists like MkX run into when trying to record a crossover as ambitious as “Fall” is, but in choosing to stick with a pretty efficient framework, he makes it difficult for the naysayers to accuse him of chasing a melodic excess best left in the history books (as opposed to being revived for the present generation of listeners).

A burst of controlled chaos that feels like a cornerstone of his growing catalogue, “Fall” is the most provocative look we’ve seen from MkX so far and definitely something that I think his longtime fans are going to find particularly intriguing this autumn season. November has given up some really interesting indie releases, but if you’re looking for the charm of a traditional pop song with none of the conventional compositional trappings found in the genre’s contemporary output, “Fall” just might be the single your playlist has been missing.