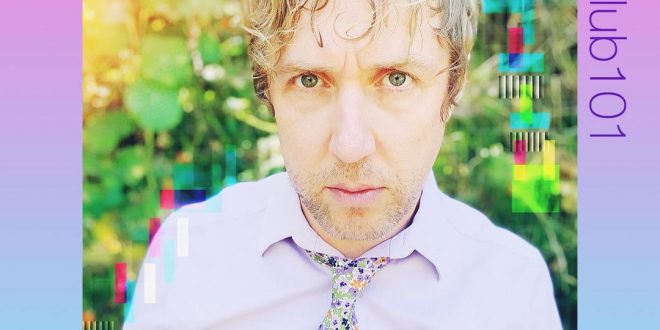 Listening to Yachtclub101 is like triggering a soundtrack to the life you wanted to live before you realized you weren’t cool. In the new self-titled album, Yachtclub101 takes the fun of a synthesizer and drills holes only to fill those gaps with juicy pop and maybe even some sardonic folk. Based in the Bay Area, Yachtclub101 has just the right balance between quirky and a lovely, endearing ride that lasts for a cherished 10-tracks.

Recording under the name Yachtclub101, Scott Ayers as his friends call him, has an inane ability to blend his natural melodic vocals with the synth waves that thrust up against ‘em. In the opening song, “This Too Will Pass” Ayers readies the sonic movements with the idea of forces running rampant against the protagonist. How many times does it take, before you look at yourself, and realize that you’re stuck in place….that only you can change, he sings. His voice is poppy, the backing music is upbeat. The percussion is nonstop and feverish, running parallel to the atmospheric synth. This is only the first song, so get ready. It just keeps getting better.

“Nothing They Say”, “Leave Me Alone” and “One Kiss” are the next bundle. I used that word on purpose because you start to parcel out these songs and see that they all fit perfectly with each other. Ayers blinds the listener with sky-reaching synth blends, but authenticates his artistry with truthful lyrics. You start to feel the vibrancy in his words as themes of loneliness, loss and fear take hold. In “No New Friends” the opening measures sound almost churchy. Not for long, as the funky, dance-heavy coda showers you with sonic pleasures. If you’re a fan of The Killers, you will really love this song. Ayers nails it on the head with the lyrics I’m tired of everybody’s problems, a constant state of drama, that seems to never end, I tried by everything seems clear now, this is how our story ends, no new friends. How relatable is that? I have to admit “No New Friends” is one of my favorites on the album.

The last group of songs “You Pick The Spot”, “Shake, Shake, Shake”, “Give It To Me”, “Mr. Money Bags” and “Last Call” continue the onslaught of synth and power pop. I think Ayers has moments where he seems like he’s just that guy in the corner observing everyone, and only chatting with his best friends about the other people in the room. Other times, he’s elevated above the room, and he’s brought the entire party with him to the ceiling. I loved that he says what he’s thinking and he’s relatable. He also has a solid way of getting the heartbeat going, turning on the inner furnace to make people want to dance. “Give It To Me” is dirty and fun. “Mr. Money Bags” is a riot and “Last Call” wraps it all together. And at that point, you do it all again. Yachtclub101 is going to outlast everyone else – mark my words.